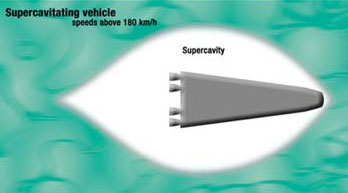 Chinese scientists are studying the applications of supercavitation to propel large bodies underwater at high speed. A team of scientists at the Harbin institute of Technology’s Complex Flow and Heat Transfer lab headed by Prof. Li Fengchen has come up with a new approach to create an ‘air bubble’ required for rapid underwater travel.

“We are very excited by its potential” Prof. Fengchen said, explaining that the unique attributes of the team’s new concept is the ability to control the vessel within the air bubble, without a rudder. Lack of steering and control has limited the application of this concept to unmanned bodies such as torpedoes, that were fired in a straight line because they had limited ability to turn. “Our method is different from any other approach, such as vector propulsion or thrust created by an engine” Li said.

Scaled up into a full size ‘supersonic submarine’, such vessel could make the distance from Shanghai China to San Francisco, CA in less than two hours

The supercavitation propulsion concept was explored in the Soviet Union in the 1960s, but implemented only with torpedoes (Shkval). In the US, applications are explored with hovercraft and counter-mine applications. (New Scientist Magazine, 7-2000) The Chinese team’s concept employs the application of a liquid spray around the underwater vessel’s body, creating a membrane on its surface, reducing the drag at low speed. As the speed reaches 40 knots (75 km/h) and higher the vessel would enter the supercavitation state. At this stage, the membrane that wraps the vessel would help with steerin by applying variable levels of friction in the appropriate axis. remain Wang said even he had been kept in the dark about recent supercavitation developments in China. “By combining liquid-membrane technology with supercavitation, we can significantly reduce the launch challenges and make cruising control easier,” he told the South China Morning Post.

Scaled up into a full size ‘supersonic submarine’, such vessel could make the distance from Shanghai China to San Francisco, CA in less than two hours. A submarine that could be traDespite these breakthough researches, supercavitating super-submarines are still decades away, Li said, including the introduction of powerful underwater rocket engines that could give the vessels longer range and higher underwater velocity, up to supersonic speed. The effective range of Russian supercavitation torpedoes (Shkval) that could travel at a speed of 200 knots (370km/h) was between 6-8 nm (11-15 km).