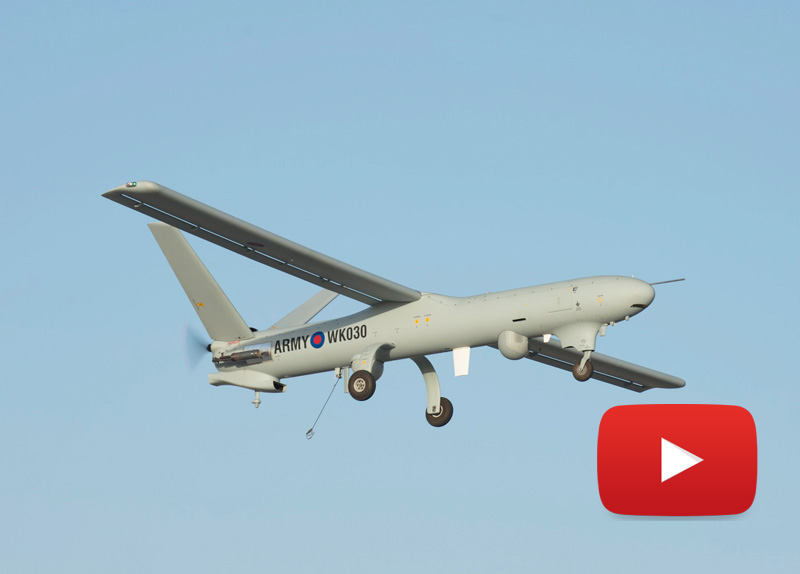 The UK Ministry of Defence (MOD) today announced the first operational flights in Afghanistan of Thales’s unmanned air system, Watchkeeper. This new capability is providing force protection for British troops as they prepare to draw down from Afghanistan by the end of this year.

The news comes as other countries assess Watchkeeper for their tactical unmanned requirements. Thales is the prime contractor for Watchkeeper. Watchkeeper secured the first Statement of Type Design Assurance from the Military Aviation Authority for an unmanned air system, a critical step to ensure the best in class system. Watchkeeper was given a Release To Service (RTS) in March 2014.

Following the handover of Camp Bastion in Afghanistan, the Unmanned Air System will return home to Wiltshire where Royal Artillery troops will continue to train with the system in a restricted airspace over Salisbury Plain. “Watchkeeper carrying out surveillance tasks and gaining situational awareness via its cutting edge cameras and radar capability, a new asset for the UK’s Armed Forces.”

Chief of the Defence Staff, General Sir Nick Houghton said following a visit in Camp Bastion, Afghanistan, where the Watchkeeper was deployed. Among the new capabilities introduced with the system are ultra high resolution, multi-modal radar and automatic take-off and landing.

“It’s been a real privilege to be the first to fly the Army’s new Watchkeeper Remotely Piloted Air System on operations. It’s an amazing capability and has already provided important information to the troops, enhancing the safety of everyone that lives and works at Bastion. The video and images we provide are a bit like what you might have seen during police chases on TV, the main differences are the videos and pictures are a much higher resolution and we fly the aircraft from a control centre on the ground.” Watchkeeper pilot and payload operator, Sgt Alex Buchanan, said.

Thales has also delivered a new comprehensive training capability based at MOD Larkhill and Boscombe Down, and has helped to establish Aberporth, West Wales as a leading UAV Testing Centre in Europe.

The new British drone has a mass of 450 kg and a payload capacity of 150 kg, with a typical endurance of 17 hours. It is based on the Hermes 450 UAV developed by Elbit Systems. The Watchkeeper is built in the UK by a joint venture company, UAV Tactical Systems (U-TacS), set up by the Israeli company Elbit Systems (51% ownership) and French European Thales conglomerate.