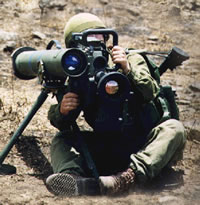 The Indian army announced today its decision to buy 321 missile launchers and 8,356 Spike anti-tank guided missile from Israel’s Rafael Advanced Defense Systems, as part of a procurement deal that could reach half billion US$.

Rafael was the sole bidder for the Army program, facing a US offer to sell the Javelin missile produced by a joint venture of Lockheed Martin and Raytheon, under a Foreign Military Sales (FMS)  scheme. This sale was offered under  Government-to Government (G2G) by the US, bypasding the Army bidding process .

The main issue of concern for the Indians was technology transfer and local manufacturing rights. Although both were promissed by the US, India did not receive access to the technology and the level of cooperation on the missile’s manufacturing and development remained vague.

Israel, on the other hand, has already sold the missiles to more than 20 customers worldwide, and had implemented successful local manufacturing and support peograms in several key markets, including Germany, Poland and Singapore.

The selection of the Israeli proposal was made back in 2010 but the actual decision to proceed with the contract was delayed due to the US pressure, which could continue now, untill a formal contract is signed.

The recent decision was taken following a meeting of the Defence Acquisition Council, chaired by Defence Minister Arun Jaitley, that lasted for over two hours with Defence Secretary, the Chiefs of all three services, DRDO Chief and other senior officials attending it.

The new missiles are needed to replace the Milan 2 missiles locally produced in India under French license. India has also produced the Russian AT-4 missiles, both considered second generation weapons. The Israeli Spike is  a fourth generation missile, as it provides users both ‘fire and forget’, enabled with the Javelin, and ‘fire and update’ options, particularly useful in engagements in complex, urban terrain.

The initial order will be supplied from Israel and supported in India, while follow-on batches will be locally produced, following transfer of technology (ToT) to defence PSU Bharat Dynamics Limited for large-scale manufacture.

India is expected to field much more than the 381 launchers it will initially buy, to replace the Milans throughout the Indian Army’s 382 infantry battalions and 44 mechanized infantry regiments, sources put the missile numbers to be procured through the life span of the program at about 40,000 . The number of launchers is also expected to increase at least five-fold, as well as procurement of support equipment, training and proficiency simulators and command and control systems supporting the weapon.