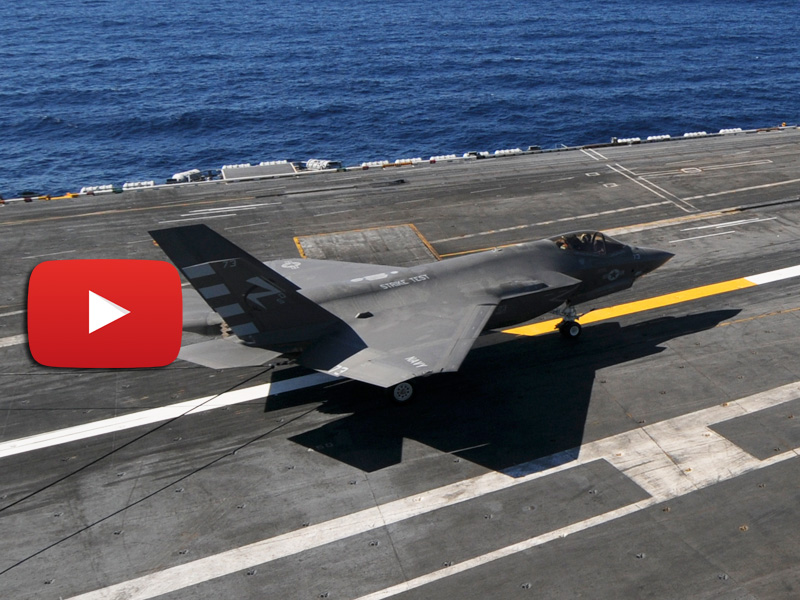 The Navy made aviation history Nov. 3 as an F-35C Lightning II carrier variant Joint Strike Fighter conducted its first arrested landing aboard an aircraft carrier off the coast of San Diego. The arrested landing is part of initial at-sea Developmental Testing I (DT-I) for the F-35C, which commenced Nov. 3 and is expected to last two weeks.

I’m very excited to see America’s newest aircraft on the flight deck of her oldest aircraft carrier, the USS Nimitz

“Today is a landmark event in the development of the F-35C,” said Wilson, a Navy test pilot with Air Test and Evaluation Squadron (VX) 23. “It is the culmination of many years of hard work by a talented team of thousands. I’m very excited to see America’s newest aircraft on the flight deck of her oldest aircraft carrier, the USS Nimitz.”

The successful recovery of the F-35C represents a step forward in the development of the Navy’s next generation fighter and reinforces Navy-industry partnership goals to deliver the operational aircraft to the fleet in 2018.

Commander, Naval Air Forces, Vice Adm. David H. Buss, was aboard Nimitz to witness the milestone event. “We begin the integration of the next generation of warfighting capability into our carrier-based air wings,” said Buss. “This important milestone is yet another indicator of Naval Aviation’s ongoing evolution to meet future threats and remain central to our future Navy and National Defense Strategy.”

As with the initial testing of any new aircraft, the goal is to collect environmental data through added instrumentation to measure the F-35C’s integration to flight deck operations and to further define the F-35C’s operating parameters aboard the aircraft carrier.

The ITF test team will analyze data obtained during flight test operations, conduct a thorough assessment of how well the F-35C operated in the shipboard environment, and advise the Navy to make any adjustments necessary to ensure that the fifth-generation fighter is fully capable and ready to deploy to the fleet in 2018.

“Our F-35 integrated test team has done an amazing job preparing for today. This will be one landing out of thousands more that will happen over the next few decades,” said Lt. Gen. Chris Bogdan, F-35 Program Executive Officer. “For months, we’ve been working with the Nimitz crew, Naval Air Forces, and our industry partners, Lockheed Martin and Pratt & Whitney, as well as their suppliers, to prepare and train for this event. We plan on learning a lot during this developmental test and will use that knowledge to make the naval variant of the F-35 an even more effective weapons platform.”

A different video shows the impressive short take off performance of the F-35B Short Take Off and Vertical Landing capability, to be utilized by the US Marine Corps and Royal Navy for operations on board flat deck carriers that do not have catapults and arresting gear.

The F-35C combines advanced stealth with fighter speed and agility, fused targeting, cutting-edge avionics, advanced jamming, network-enabled operations and advanced sustainment. With a broad wingspan, reinforced landing gear, ruggedized structures and durable coatings, the F-35C is designed to stand up to harsh shipboard conditions while delivering a lethal combination of fighter capabilities to the fleet.

The F-35C will enhance the flexibility, power projection, and strike capabilities of carrier air wings and joint task forces and will complement the capabilities of the F/A-18E/F Super Hornet, which currently serves as the Navy’s premier strike fighter.