Lockheed Martin Corp has agreed to buy United Technologies Corp’s (UTC) Sikorsky Aircraft for over $7.1 billion, US news agency Reuters reported on Sunday. Such a deal would enhance Lockheed Martin’s dominance in the aerospace market, while adding a civil element to its defense-oriented portfolio. The demand for military and civil helicopters has softened in recent years, primarily due to reduction in demand from the military and offshore operators in the oil and gas business. 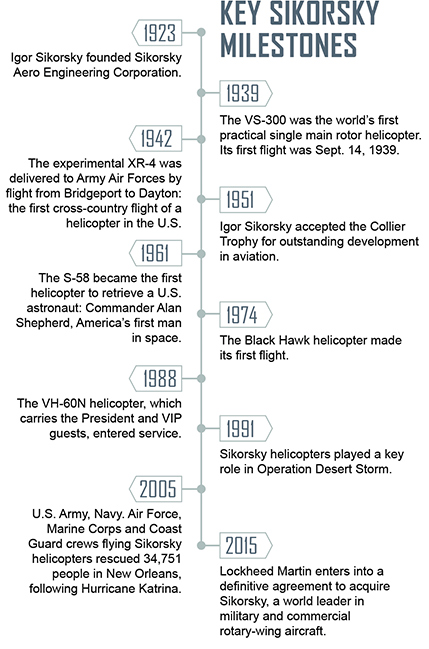 Lockheed is likely to preserve the Sikorsky brand and business operation instead of integrating it into its already huge Aeronautics division, which had revenues of over $14 billion last year.
United Technologies and Lockheed officials declined comment. If approved, it will be the largest acquisition of Lockheed martin since it bought Martin Marietta Corp for about $10 billion two decades ago.

UTC in March said it would explore alternatives for Sikorsky, which accounted for $7.5 billion in sales last year out of total UTC revenues of $65 billion. In June, it said it would exit the helicopter business and sell or spin off Sikorsky, which expects slower revenue growth and has lower profit margins than other UTC divisions. Sikorsky’s first-quarter operating profit dropped 11 percent on a 7 percent fall in sales. In June, the unit announced 1,400 job cuts and said it would consolidate facilities.

Lockheed Martin and Sikorsky Aircraft have already cooperated in several projects, primarily the naval Anti Submarine and Surface Warfare (ASuW) MH-60R program for the US Navy. Lockheed’s main competitor Boeing, which also competes with Sikorsky with its heavy lift and tilt-rotor aircraft, has teamed up with Sikorsky to develop a next-generation helicopter for the U.S. military.

As for UTC, Cutting ties to Sikorsky will let the company focus on divisions making jet engines, air conditioners and elevators while exiting the very different business of supplying rotary-wing aircraft to the U.S. and foreign armed forces.