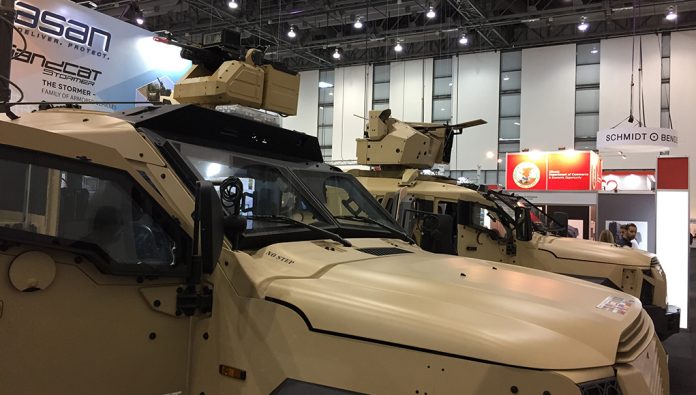 The ISDEF 2017 exhibition held June 6-8, 2017 in Tel Aviv was Israel’s largest defense event held in Israel. As in previous years, the focus of the exhibition was on interoperability and the diverse use of products by end users for various purposes.

With more than 14,000 attendees and almost 300 exhibitors – 42 percent were Israeli companies, and 58 percent came from 24 countries with national pavilions from India, the USA, Czech Republic and China. The event featured advanced products and technologies from leading domestic and international companies to small startups.

Plasan displayed two of its latest configurations of the Sandcat (Stormer) at ISDEF, one version demonstrated here was the security vehicle carrying a mast mounted surveillance package comprising radar and electro-optical system. The other vehicle carried the Samson remotely operated weapon station mounting a machine gun and two Spike missiles.

ExSight displayed here the Safedrive, its latest dual-sensor vehicle camera improving the driver’s view into ‘blind spots’ to detect obstacles and hazards before they come into sight. The camera enables the driver to ‘drive by video’, with high confidence even in bad visibility conditions. Maintaining full situational awareness in high-risk zones, the system uses video content analysis (VMDBOX) providing peripheral situational awareness by monitoring the vehicle’s surrounding, reporting abandoned objects, loitering and other video motion triggers predefined by the user.

Innovations in the field of personal protection included applique armor kits for helmets, made of ultralight carbon fiber reinforced by ceramic strike face. The Bastion helmet design was based on thorough analysis of battlefield epidemiological data and casualty statistics, is designed to improve protection where it is needed most. The helmet comes with padding system designed to add comfort and safety, absorbing the high impact of rifle rounds. applique armor can be removed in the field. The protective armor applique was designed for standard helmets, augmenting the helmet’s capability to defeat armor piercing rounds. With the additional armor, the Bastion helmet can defeat all common rifle rounds, including 5.56mm M855 (M4, green-tip) and the 7.62mm PS Ball (AK-47). The helmet provides multi-hit performance and spall mitigation.

The Source Tactical Gear company displayed in Israel the Virtus combat gear developed by the Israeli company for the British Army. The Virtus system comprises a modular kit made of 50 different units, that can be configured to equip the British combat and combat support troops.

Unmanned aerial systems were also an interesting topic at ISDEF, with several new systems displayed. One of the hot products was Instanteye, developed by the US company PSI Tactical. This miniature drone was displayed in Israel for the first time, addressing the Israel Defense Force interest in miniature drones. In recent months the IDF has purchased large stocks of commercial off the shelf mini-drones from DJI and has also contracted Elbit Systems to develop a militarized quadrotor.

Innovative electrical propulsion solutions for UAVs were displayed by Albus Technology. Among the systems showcased here was an independent, modular drive based on four axial flux electrical motors, each delivering 12.5 kilowatts power at 6000 RPM. The complete powerplant with an optional 1:3 reduction gearbox weighs only 3.3 kg. One of the applications for this system is a twin-rotor propulsion system that doubles the lift of a quadrotor, at a fraction of the weight.

ISDEF 2017 was also the main event celebrating 25 years of diplomatic relations between Israel and India. This manifested in the presence of official Indian delegations at the diplomatic level, including as an Indian national pavilion of 400 Square meters. In addition to the Indian pavilion, ISDEF also featured national pavilions on an unprecedented scale; including Czech Republic, China and U.S pavilion with 30 exhibitors.