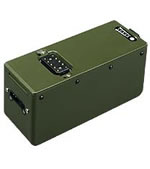 The BB 2590 lithium ion rechargeable battery is the new generation of rechargeable battery, planned to replace BB 390 Ni-Cd models which was used primarily for training. Several manufacturers are producing the battery, and new chargers are offered to provide optimal support for the product.

The British Army was one of the first forces to adapt rechargeable batteries for its combat equipment. The batteries chosen by the British Army are using the Lithium-ion (Li-ion) Kaizen cell developed by AEA (picture at right), fitted with integrated intelligent electronics offer reduced size and weight, compared to current technology cells. A typical 6 man patrol will have full control over its battery resources, and be able reduce its attributable battery weight load from 14kg to less than 3kg – giving advantages in both mobility and capacity for other equipment. The new cells has been designed specifically to meet the extreme requirements of rugged applications and thanks to its hermetic sealing and no memory effect, even after periods of inactivity, it will still deliver full performance. The battery offers effective operation in extreme temperatures, ranging from -51 degrees centigrade to +75 degrees centigrade. The temperature performance of the Cell will end the practice of “shirt stuffing” whereby the existing Ni-Cd battery is carried next to the skin in an attempt to keep it warm. Improved recharging is achieved by more reliable fuel gauging, optimized charge and discharge regimes and battery history monitoring enable maximization of battery life – up to 1200 recharging cycles, four times more often than previous NiCd batteries. The HF Radio battery for Bowman batteries utilize the Mil Std BB2590 form factor, to provides high capacity, yet offers the rugged, light weight and wide temperature operability features.