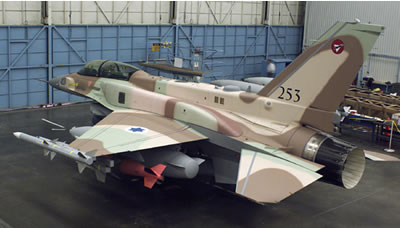 The F-16I is based on an advanced F-16 Block 52 aircraft. The Israeli version has integrated several new systems, developed and produced in Israel, required by the IAF, to maintain and enhance its operational capability. Despite the inclusion of many additional systems, the empty weight of the aircraft was maintained at the level of current Israeli Block 40 (Barak) F-16s. The “diet” included the use of lightweight materials, as well as the use of advanced avionics that offer considerable saving in weight and space.

The Sufa version of the F-16 Block 52 has a distinctive dorsal avionics compartment that accommodates all of the systems of the single-seat model as well as some special mission equipment and additional chaff/flare dispensers. The Israeli model is powered by the Pratt & Whitney F110-PW-229 Increased Performance Engine (IPE) engine develops over 29,000 lbs of thrust but weighs only 3,740 lbs. It incorporates modern turbine materials, cooling management techniques, compressor aerodynamics and electronic controls – many of them derived from F-119 and F-135 engines used in the new F-22 Raptor and JSF. The Advanced Block 52 aircraft use the Normal Shock Inlet (also known as the small mouth inlet).

The Israeli F-16I cockpit features a helmet-mounted cueing system, color multifunction displays and recording equipment, cockpit lighting and external strip lighting compatible with night vision goggles, and large-capacity data transfer sets. Cockpit displays are driven by the Integrated color display processor (ICDP) developed by Elbit Systems, which drives the six multifunction color liquid crystal displays with 484×484 pixel resolution, built by Astronautics CA. HUDs are delivered by BAE Systems (initial 18-25) and El-OP (77-84). For the first time, the company embedded a digital map system and digital terrain flight algorithms into the ICDP computer. Such integration has saved considerable weight, wiring and logistical and technical support, previously required for separate systems. The Inertial Terrain Aided (RITA) system, developed by RAFAEL, uses proprietary algorithms based on accurate terrain reference navigation that improve low-level flight safety, and enable terrain following flight in all weather conditions, day or night and improve flight safety by avoiding ground collision. The aircraft is also equipped with a LANTIRN navigation pod, which enables automatic terrain following flight, utilizing a combination of forward looking imager and TF radar. This system enables the both crew members to fly safely at low altitude, as they were flying on “autopilot”, and concentrate on the employment of mission system and weapons. The fully missionized rear cockpit is used for navigation and Weapon Systems Operation (WSO).

Each cockpit has three displays and Head Up Display (HUD). Color coding is designed to match specific information, in different operational modes, to emphasize the information most important at every phase of the mission. All cockpit lighting, including the color displays, are designed to work with night vision systems. The tandem cockpit utilizes two fully functional positions for the pilot and weapon systems operator and navigator, both are equipped with the DASH-IV helmet mounted display and sight, developed by VCI Inc, a Rockwell-Collins / Elbit Systems Joint Venture which is also developing the new JHMCS helmets for the USAF and US Navy. The helmet display also provides critical flight and target information to the pilot — similar to a head-up display, but in any direction the pilot looks. DASH IV is a fourth generation of the DASH system, of which 500 are already in service. The new system offers several advantages compared to previous models, such the addition of a video camera that can record the pilot’s view to the mission debriefing system, more accurate line-of-sight tracking, etc. The system offers improved tracking accuracy and a miniature helmet mounted video camera that records the pilot’s line of sight view.

Another improvement over previous F-16 versions was introduced in the core avionics, which utilizes the General Avionics Computer (GAC) delivered by EFW, a division of Elbit Systems. This computer benefits from technology advances including increased processing speeds and memory capacity, by the using off-the-shelf technology, which improves supportability. The aircraft is equipped with a high capacity, ultra-fast network based on a fiber-channel backbone, which links all avionics modules, external stores and sensors into a unified, high capacity multi-channel network. Utilizing a high capacity (1 gigabyte) switch, the FiberChannel runs data streams over five channels with standards based protocols such as 1553 and 1790.

The navigation equipment is based on a 7 channel GPS and ring-laser Inertial Navigation System (INS), an integration of systems produced by Honeywell, Raytheon and General Dynamics. The TACAN is provided by Rockwell, which also provides the ARC-217 HF radio. BAE Systems is providing the ILS system and an advanced IFF transponder/interrogator. which improves the operation of the aircraft beyond visual range, and enable safe employment of long range A/A missiles. The communications equipment is based on an integrated voice/data system, that incorporates RAFAEL’s Green Radio, a localized and improved version of the Rockwell Collins ARC-210 VHF/UHF radio, equipped with a data modem, and an advanced data-link system, produced by IAI/MLM. These classified systems are believed to be more advanced to Link 16, offer integrated, secured and jam-resistant communications was designed to provide instantaneous high quality, high capacity communication between surface and air elements.