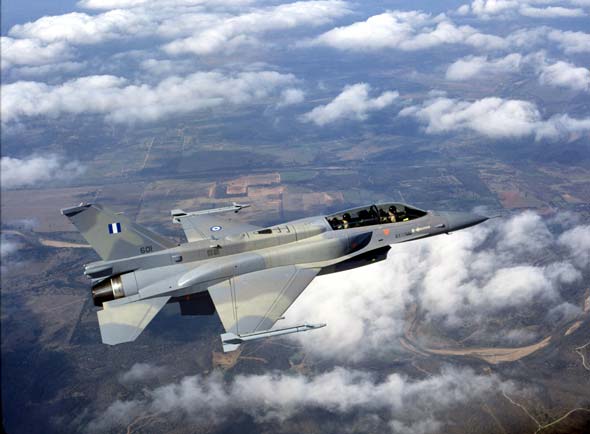 Block 52/60 F-16 aircraft, currently procured for Israel, Greece and the UAE, have structural, plumbing, and wiring provisions for the Conformal Fuel Tanks (CFT). These external, pod-like fuel reservoirs are attached on the upper surface of the F-16’s fuselage, with the tank’s lower surface conforming to the aircraft shape. The upper surface arrangement allows the CFTs to be relatively light weight because nothing is suspended from them. With an empty weight of 900 pounds, tank set holds 450 gallons (ca. 3,050 pounds, or 2,271 litres) of additional JP-5/8 fuel.

The extra fuel increases range, loiter time, and combat persistence as well as reduces the demand for tanker support. Range increase is on the order of twenty to forty percent, depending on the stores configuration and mission profile. The tanks have neglible effect on the aircraft agility, at subsonic speed, However, at supersonic speed, the drag is increased proportionally to the increase in speed. When fitted with CFT the aircraft retains almost the full handling qualities, flight limits, and signature. A complete set can be removed or replaced within two hours. The CFTs are built to Lockheed Martin’s specification, by IAI as a sole source, as part of the Peace Marble V program offsets.

“The CFTs have very little adverse effect on the F-16’s renowned performance,” said Maj. Timothy S. McDonald, U.S. Air Force project pilot for CFT testing at Eglin. “A set of CFTs carries 50 percent more fuel than the centerline external fuel tank, but has only 12 percent of the drag.” The CFTs are designed for the full F-16 flight envelope – up to 9 g’s, maximum angle of attack and sideslip and maximum roll rate.

Israel, for example placed a special significance to the operational flexibility of its new F-16I, derived from the added range and endurance provided by the CFT. For medium range air-to-surface missions, CFTs can eliminate the need for wing tanks. This allows doubling the F-16’s primary weapon capacity and flying with two, rather than one, types of large weapons in a balanced configuration. In long range missions, the use of CFT dramatically increases the operational radius of the aircraft, since it enables the aircraft to fly a long range strike mission, with full weapon’s load, and engage in air combat when external (370 Gal) fuel tanks are dropped. When external 370 gal jetissonable tanks or 600gal non-jetissonable external tanks are added the F-16 can demonstrate up to 60-70 percent increase in operational radius. Another Israeli development utilizes a new fuel carrying configuration for the F-16, which enables the carrying of up to four 370 gallon external tanks, plus one 300 gallon under the belly, resulting in 25% increase in mission radius and twice the endurance on patrol missions.