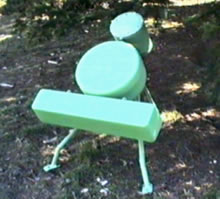 AHM-200-1 was the prototype anti-helicopter mine designed to operate against low flying helicopters. The 90 kg mine is activated by specific targets, identified by acoustic and radar Doppler shift signatures. The acoustic sensor can identify targets at a range of 500 meters. The Doppler sensor can measure the target range, at distances up to 150 meters, activating the mine at a distance of of 100 m from the target. The mine uses two warheads, an explosive formed projectile and augmented by a second TNT bar charge distributing 17kg of steel ball fragments. The mine can be activated for periods up to 30 days. The mine is placed on a stand permitting general orientation of the sensors and charges in the direction of potential threat. The control unit uses a signal processor to process the acoustic signals and determine activation parameters. Activation, neutralization and explosion by Radio control from a range of up to 2,000 meters is optional in model AHM-200-1RC. The mine will explode when attempts for moving, tampering or disassembly during its activation phase.

AHM-200-2 is a modified version of the original anti-helicopter mine, under development at the Institute of Metal Sciences in Sofia, Bulgaria. This version weighs 90 kg, but uses a larger, 23.5 kg load of cubic steel fragments, rather than steel balls used in the basic model. It uses a different type of an explosive formed projectile, believed to incorporate up to five sub-charges.

The institute is developing a new concept concept of a distributed anti-helicopter mine designated 4AHM-100. This new weapon will consist of 4 vertical, surface laying charges positioned in an array to effectively cover an area of approximately 0.4 square kilometer. Each charge creates a fragmentation cone maintaining effective lethality up to 100 meters. The total system weighs 125 kg and can be operated continuously for up to 90 days. The array uses four charges linked to a centrally located sensor and control unit. Unlike previous models, these warheads are placed horizontally on the ground enabling effective concealment. As previous models, the sensor uses acoustic and Doppler radar sensors for target identification, ranging and activation. However, this system uses more sophisticated digital signal processor which can identify specific types of helicopters, based on customer specific threat library.