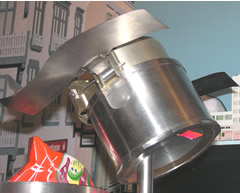 Bonus artillery launched, fire-and-forget artillery shell targets and destroys armored vehicles (stationary or mobile) by top attack submunitions. Each BONUS shell carries two BONUS Submunitions, and is provided with base bleed system to reach ranges of 35km. Two Submunitions are carried in each shell, covering an area of 200 m’ in radius. The BONUS submunition deploys two “wings” which stabilize its rapid descent path and fast spin required for target scanning. BONUS acquires a target by multi-spectral infrared signature. BONUS II, which will enter production in 2005 will also add a laser radar (LADAR) for improved aiming into a target shape generated by a laser radar (LADAR) sensor. The fusion of spectral and target profile enables BONUS to separate between combat-worthy targets, damaged or burning targets as well as decoys. Each submunition is equipped with explosive formed penetrator (EFP) striking the target by top attack. BONUS II is equipped with improved IR sensors capable of engaging targets with reduced IR signatures and countermeasures. BONUS is in production since 2003. Over 1000 BONUS shells have already been delivered to the French and Swedish armies, and current production programs are scheduled to last til 2007