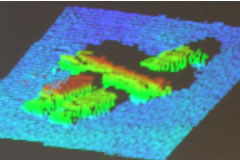 Laser Radar (LADAR) is employed similar to millimeter wave radar, but uses laser beams to scans and process the signal echoed from targets, to create a virtual picture of the area. The LADAR processor looks for familiar patterns in the scenes. The processor continuously compares these patterns with 3D targets files stored in the weapon’s memory. Due to its capability to scan large areas with very high precision, and its ability to gradually build a detailed picture of the area under surveillance, LADAR sensors are usually employed on loitering systems, which can look at the target from different angles, verify the target identification and select the best attack position for the desired effect.

Laser Radar (LADAR) seeker can detect objects and identify specific features with very high definition of up to 15cm resolution (from a distance of 1,000 meers). An Automatic Target Acquisition (ATA) algorithm continually processes the images to identify and acquire targets based on 3D templates preloaded into the weapon’s memory before the mission. The process determines if priority targets are present in the area, and when evidence of such targets is detected, the weapon is commanded to loiter over the suspected target, to acquire more data. Gradually, a 3D image of the target is generated, to either reject or verify the target. Once a target is verified and assigned for attack, the weapon is commanded to place itself in a position and aim to the point that will yield the best effect on the target.

On 24 May 2006 Lockheed Martin was awarded a US $7.8 million contract for the development of a 3D laser radar for the US Air Force Predator UAV fleet. the Predator Imaging Laser Radar program, will demonstrates a 3-dimensional imaging laser radar sensor suitable for installation on an unmanned air vehicle (UAV) such as a Predator, meeting the volume and weight constraints of such platform. The program is scheduled to continue through May 2009. 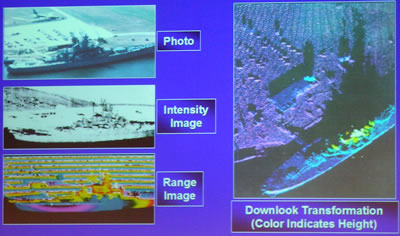