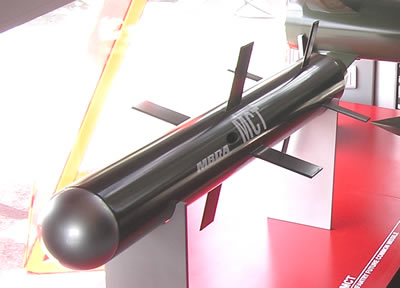 In 2002 The French MOD has expressed its requirements for ground combat missiles for the year 2015. The future family of missiles is considered as an integral part of the French Future Air-Ground Operational Forces project (also known as BOA). Responding to this requirement, as part of the MCT Technology Demonstrator Program (TDP), MBDA is developing a full capability indirect fire demonstrator.

The missile will be able to engage targets at a Non-Line Of Sight (NLOS) mode, where the missile’s seeker does not have to be aimed at the target before launch. Once the missile is in flight the operator will be able to designate the target using the images seen by the missile’s seeker and relayed back to the firing control unit. Development of the demonstrator will also rely on the European Modular Munitions cooperation between MBDA and Saab Bofors Dynamics, and is positioned to support future British, French and Swedish requirements. This program considers various configurations for future missile’s designs, including rocket powered medium (command Line Of Sight – CLOS), and long range versions with range of 8 km and turbo-jet powered extended range (air launched) missile with a maximum range of 100km. All variants will share common modules of the body, and missile’s systems architecture, utilizing common core “plug and play” elements such as imaging IIR or CCD seekers, multi-mode semi-active laser seeker and optional datalinks.

The warhead considered for the missile will be “multi-effect” warhead, making the weapon effective against a broad target set, including fortified constructions, bunkers, armored vehicles and soft targets. The warhead could be equipped with a programmable lethality package to create “scalable” effect, tailored for specific operating scenarios. The use of imaging sensors and advanced target recognition algorithms will enable the use of dynamic, autonomous targeting features, including aimpoint selection to maximize the effect on the specific target.