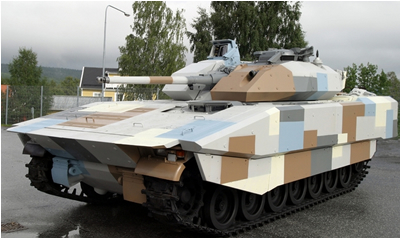 Export of the BAE Systems Land Systems Hägglunds CV90 Mk II series IFV continues as the vehicle gets new upgrades preparing it for the latest threats. Since entering service with the Swedish Army in 1993 the CV 90 is operated by Norway, Finland and Switzerland. Netherlands became the fifth country to operate the vehicle; the first of 184 ordered will be delivered in 2007. The Dutch configuration will be armed with a 35mm/50mm cannon. At DSEi 05 the vehicle was shown installed with a new modular appliqué armor kit, developed by RAFAEL. The armor suit can be adapted to meet specific threats including mines, horizontal HEAT and kinetic energy (KE) projectiles and top attacks. The vehicle will also be offered with an integrated defensive aid suite, comprising laser warning, radar and missile approach warning. According to Rafael, this new-generation armor is based in part on its new insensitive reactive armor, combined with various types of passive armor appliqués.

CV90 vehicles are operated by the armies of Norway, Finland, Switzerland, Netherlands and now Denmark. Total orders of CV90s series vehicles including the 4th generation CV9035 MkIII amount to for 1,170, of which 45 are on order by Denmark. The CV9035, built by , is a new-generation CV90, with improved fire power, protection, mobility and ergonomics plus an advanced electronics architecture.