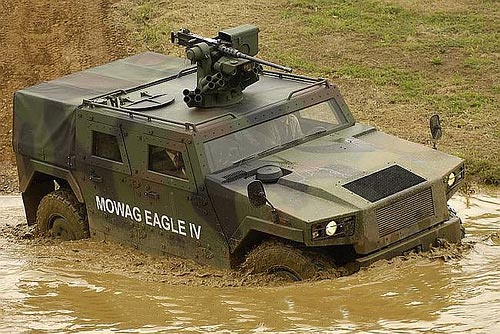 The shell is based on metal and composite armor, withstanding STANAG level II or III threats, according to the type of vehicle used. The length and height of the original Humvee are maintained, to enable air transport mobility in C-130. The maximum combat weight of the baseline vehicle (Eagle I) vehicle is 4,800 combat weight – 3,800 kg plus 1,000 kg. of payload. Eagle II which was designed to provide high protection for UN peacekeeping units, weighs 4,100kg and can carry 1,400 of payload. (total 5,500kg combat weight). 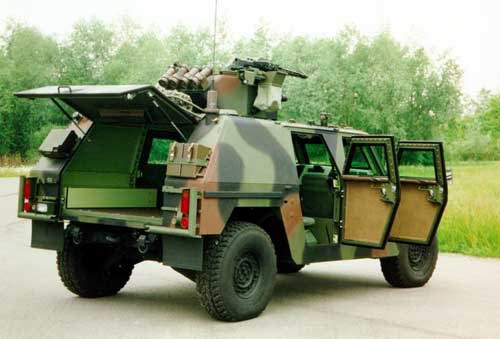 A special reconnaissance version, designated Eagle III has an operational weight of 5,100kg, including the armor cage and crew. This vehicle has reached the maximum weight limit of the Humvee platform – with a combat weight of 5,800 kg (including 700kg payload).

The development of a new version, designated Eagle IV was completed in November 2003. It is much heavier than the baseline Eagle, using a different chassis, based on the Duro light truck, also produced by Mowag. It’s combat weight reaches 7,600 kg including 2,400 of payload and high level protection meeting STANAG 4569 level III protection and STANAG 4569 Level IIa mine protection (6kg TNT under each wheel). The vehicle’s width is smaller than the Humvee, which allows two ready to combat Eagle IVs to be be transported in a C-130 without special preparations.

In December 2005 the Danish Army Material Command awarded MOWAG a $38 million contract for Eagle IV. The contract includes initial logistics support and equipping the vehicle with an Overhead Weapon Station, Communication and Battle Management Systems and other equipment. Production will take place at MOWAG’s facility in Kreuzlingen, Switzerland, and deliveries will begin in August 2006. The Danish Army also operates the MOWAG Eagle I and Piranha III – both produced by Mowag.