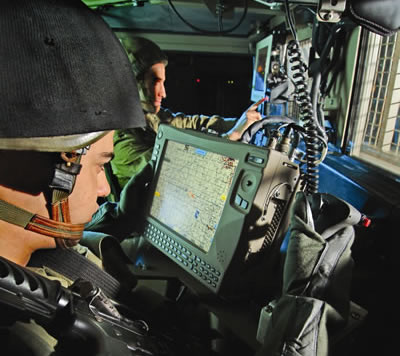 The current trend in the IDF calls for the development of tactical units designed specifically for Urban-LIC. These units are scheduled to field much expanded C4ISR systems enabling autonomous control of multiple sensors and effectors. The units are expected to field advanced Battlefield Command Systems (BMS) and a new command and control network, known as TORC2H, both produced by Elbit. Such integration will provide units with a clear picture of the battlefield, enhanced situational awareness and will enable tactical units to share pieces of the situational picture that are relevant to their activity.

Sharing C4 means these tactical elements will also be able to share data, images and even live video from their weapon’s cameras, as well as organic sensors. Visual Defense is providing this connectivity over irregular narrow-band communications, including commercial cellular devices and combat net radios. To support communications within the urban area, RAFAEL’s Lightlink has been demonstrated to provide wideband data networking over and within large and cluttered urban area. These capabilities are required to feeds images, reports and voice communications from war fighters to the platoon and company commanders and to battalion command posts, where fusion of the situational picture is done.

Much simpler yet essential devices for this type of warfare are the foldable periscope, and lightweight assault ladder carried in a backpack. The assault ladder enables troops to deal with many of the vertical obstacles encountered in urban terrain.