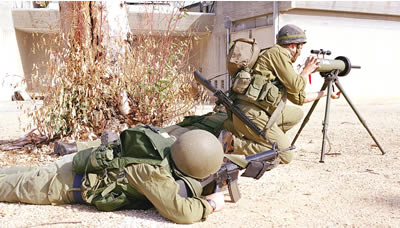 Recent conflicts are challenging the world’s military powers with Urban Low-Intensity Conflict (Urban-LIC) warfare. This type of operation requires new strategies and operations that are significantly different from classic Military Operations in Urban Terrain (MOUT), which considered the urban area as one of many topographic terrain models, but rarely addressed the unique human factors of a live city. In recent years, insurgents around the world realized the benefits of operations from and within friendly populations: Efficient concealment for personnel, infrastructure and communications, contributing to pervasive close-encounters by small groups. Using hand guns, improvised explosives and suicide bombings with high precision and devastating effect have become common in recent years in Western Asia – from Chechnya through the Gaza strip to Iraq.

“A basic lesson we learned is the importance of preemption. We cannot wait until suicide bombers or terrorists make their way to the target, or rockets are launched at our cities,” – Brig. General Ido Nehushtan, Chief of Staff and Deputy Commander, IAF told Defense Update. “When pursued where commanders and planners are lurking at their hideouts in the cities, we dramatically reduced the number of terror attacks in our population centers.”

After years of continuous fighting, the IDF has adopted three practical modes of operation. Two are adapted to ground operations in the West Bank and the Gaza Strip. The third evolved into “aerial domination” of an urban area, and is currently practiced with considerable success by the Israeli forces over the Gaza strip.