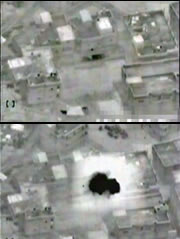 The latest trend is the introduction of the IAF as a significant element in area domination. For years, IAF helicopters and UAVs continuously patrolled trouble spots but airpower has proved even more effective since mid 2003 when the IAF implemented measures to control the signature and effect of its missions in the urban area while also assuming more responsibility within the joint operations field. Adaptations were made to most platforms and weapons, preparing them for superior performance in the new mission profiles.

“We should be able to choose our means, weapons and effect from a pound to a ton,” says Brig. General Ido Nehushtan, Chief of Staff and Deputy Commander, IAF. At the beginning of this conflict the IAF did not have suitable ordnance that could strike with the required pinpoint precision in restricted terrain conditions. This shortfall, according to Nehushtan has been eliminated. “We modified our systems, originally built for full scale wars, introducing necessary changes and adaptations which now enable improved performance and capabilities in both high intensity and low intensity warfare scenarios”.

Urban warfare and area domination activities have little to do with the IAF’s original role. Nehushtan explains that the target characteristics of urban warfare, especially for air warfare, are very challenging. “This is one of the most complex conflicts we have fought in.” he says, “Unlike general perceptions of ‘low tech’ threat, we face stealthy and evasive targets far more complex than conventional military targets. Threats are not restricted to surface-to-air missiles and gunfire, but include risks caused by inadvertent collateral damage, which could have strategic implications as well as leading to negative local and international reactions.

Complex operational restrictions and self-imposed rules of engagement are implemented to safeguard sensitive areas such as schools, hospitals, holy places etc. In return, terrorists, who rarely abide by any ethics in war, tend to exploit such restrictions to establish “human shield” situations, as they operate in the immediate vicinity of civilian occupied buildings. “One can hardly define a clear ‘terrorist infrastructure target’ that can be easily attacked from the air,” says Nehushtan. Such targets may reside in a specific room, which must be attacked from specific angles with highly accurate weapons, developing limited effect, devastating the target itself, but without causing damage beyond it.

These engagements require very precise and actionable intelligence, clear proof of the target’s intent, and surgical response with the measured effect necessary to neutralize the target, without causing collateral damage. Full integration between intelligence, ground, air forces and Special Forces, are necessary to ensure that the most effective means are used to engage time critical targets. In some cases, targets are visible only for a few tens of seconds. To enable such rapid decisions, the IDF has established “short decision cycles” employing highly skilled and experienced representatives from all relevant entities, who are familiar with the area, and understand the implications of each mission. They can choose the physical means, location and time where and when action is necessary to create an effect without unnecessary damages.

Such operations depend on actionable intelligence, both HUMINT and intelligence coming from real-time sensors, providing persistence and fast response to emerging opportunities. “Intelligence is not sufficient in itself. Target behavior is an issue that must also be considered. Those under constant pursuit adapt evasive behavior and only expose themselves for very short periods of time. The ‘window of opportunity’ to strike such targets may last only a few seconds, far below anything the military organization was prepared for in the past.” Nehushtan considers several key capabilities necessary for effective air operations in urban area. “Since modern terrorism resides and operates in urban surroundings, one must face them in such environments. Persistence is a key for effective engagement, keeping the enemy constantly on the defensive.”