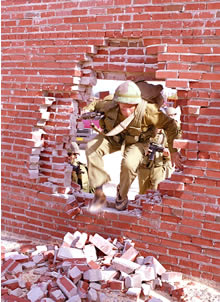 An exception to this strategy was Operation Homat Magen (Defensive Shield) in April 2002, which followed a series of deadly Palestinian suicide attacks launched from the West Bank. The IDF entered the West Bank urban centers simultaneously in order to defeat the terrorist networks in their ‘backyards’.

Two actions demonstrate the different approaches – The operation in Nablus, considered to be the toughest stronghold, went surprisingly smoothly, as elite paratroop units broke into the dense dwellings of the Qasba, (the ancient inner city), suffering minimum casualties. Specially trained for such operations, the paratroops used new breeching equipment to open gateways into the dense Qasba and between walls of neighboring houses This enabled them to move inside the buildings, well protected by the massive walls, and allowed bypassing of the IED ambushes prepared by the Palestinians. Two of the most challenging aspects of this operation were maintaining situational awareness and avoidance of “blue on Blue” fratricide incidents.

Operations in the Palestinian refugee camp of Jenin demonstrated a different approach. Publicized for the high casualties suffered by both sides and the massive devastation to civilian property, this operation was executed under pressure, following conventional urban combat methods. To minimize casualties among non-combatants, the IDF tried to evacuate civilians from the area before the attack. These measures delayed operations and enabled terrorists to prepare their defenses. In retrospect, this approach has proven to be unsuitable for Urban-LIC. Jenin also demonstrated the high lethality potential of urban combat. The IDF suffered most of its casualties as dismounted troops entered ‘kill zones’ and were engaged by multiple IEDs and small arms fire. Large armored vehicles could not enter the narrow streets of the refugee camp, which necessitated the employment of heavy armored engineering equipment to destroy infrastructure in order to open fields of fire and allow necessary mobility, an action that created criticism in Israel and abroad.

Tactics adopted following these campaigns improved urban fighting capability of the IDF and prepared troops for situations where innocent civilians are present. The new tactics allow IDF forces to minimize collateral damage while denying the terrorists the use of civilians as human shields.

The topography of the West Bank enables Israeli forces to completely cover the target area with surveillance, effectively blocking escape routes. Continuous activity dramatically reduces the number of insurgent activities in the area.

Among the Special Operations units created for urban warfare in the West Bank is Duvdevan (Cherry), an undercover infantry unit, trained to blend into the Arab population. The role of Duvdevan teams is to apprehend suspects when possible or, if apprehension is not possible, to neutralize these hostile targets. When performed successfully, these stealth operations end without any territorial gains, but result in the capture of live terrorists, key members of the “IDF most wanted list”, who provide valuable intelligence for follow-on operations.