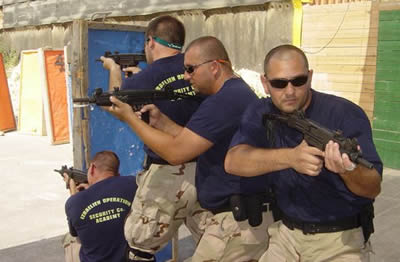 Israel’s Operational Security (IOS) Academy provides professional counter-terror training based on unique know-how and tactics developed and practiced by Israel’s special operations forces, Mossad and the Israeli Security Authority ISA (formerly  Shin Bet orShabak). Courses that include theoretical and tactical lessons, unarmed combat techniques, simulated and live combat firing practice in security and anti-terror scenarios, and driving techniques are provided for government agency’s special security units, and VIP bodyguards. Training courses can be conducted in host countries in Europe, Africa and China as well as at I.O.S.’s 4,000 square meter facility in central Israel. The IOS facility has 24 shooting ranges, including a secure open range where students can practice day and night 360° firing at distances up to 200m.

The I.O.S. academy offers professional military counter-terror courses tailored for training of both takeover and engagement units. Training methodology for the two courses is common, enabling units to cooperate for large-scale operations during crises where involvement of more than one type of unit is required.

“Our comprehensive CT course covers extensive individual combat training for use in counter-terror situations, including combat shooting when innocent civilians are in the area, unarmed combat and sniper techniques,” says Gil Chayoun, general manager of the academy. “As well as brushing up individual skills, we provide the foundations for team actions by practicing realistic, complex maneuvers by day and night, involving critical situations such as takeovers of complex objects such as aircraft, schools or embassies, etc. Real buses, train-cars, and various types of buildings are used to provide training in realistic environments,” says Chayoun.

Techniques taught range from situational assessment using visual simulators, to commando style takeovers using techniques for rappelling from tall buildings or roofs. Other phases of the course include training in theoretical and practical skills such as introduction to negotiation techniques, which teaching basic techniques for negotiating with terrorists. Counter-terror operations planning and equipment and personal gear recommendations are included in the theoretical aspect for the training schemes. Other focus includes the employment of bomb disposal squad techniques for handling bombs and Improvised Explosive Devices, (IED) as well as the use of Explosives Ordnance Disposal (EOD) equipment.

The I.O.S. academy also trains bodyguards for government, commercial and elite V.I.P. security functions, such as the protection of diplomats, embassies, businessmen, civil contractors operating in high risk areas, etc. The course combines all the theoretical and practical knowledge required for these activities. All instructors are former commanders of Israeli Army elite forces, or intelligence agency operatives, who can providing insight into the latest security methods and techniques combined with safety techniques and risk reduction.
Students taking part in the V.I.P. protection course practice with all types of weapons ranging from 7.65 and 9 mm pistols such as the Jericho and Beretta, up to semi-automatic weapons including the Galil, Uzi, M-16 and other models, in a comprehensive range of situations that can be encountered during both day and night operations. They also practice defending VIPs at home, with or without family members present, in cars, offices, and other common situations. Other training elements cover unarmed contact combat, driving techniques, shooting techniques, evacuation, day and night convoy movement, and related activities. An extensive theoretical section covers all aspects of security planning.

“Our Krav Maga (contact combat) system is unique among techniques used for counter terror,” says Master Avi Avisidon, the chief instructor of unarmed combat at I.O.S., an Dan 8 who has professionally practiced Krav Maga methods for more than 30 years. “We teach how to handle weapons and all types of terror situations.” According to Avisidon, the Krav Maga system is based on natural body movements and is exceptional in being simple, fast and efficient. “The first part of the system, self-defense, develops the ability to defend against violent attacks, and is designed for men, women, children or the elderly. The second part, Krav Magen (defensive combat) is designed for people who may be forced to engage in armed or unarmed combat in their line of duty.” Says Avisidon. The Krav Maga system has been adopted by the Israeli commando units, the Israeli Army, police units and Special Forces units all over the world. The I.O.S. academy is pre-eminent today in both types of martial arts.