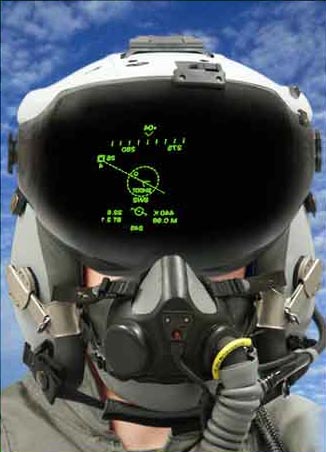 The Joint Helmet-Mounted Cueing System (JHMCS) gives flight crew members the ability to rapidly acquire and designate a target simply by looking at it. By placing an aiming cross, projected on the helmet visor, over the desired target and pressing a button, pilots can quickly and easily aim weapons and sensors to designate and attack airborne or ground targets. JHMCS also displays aircraft altitude, airspeed, gravitational pull, angle of attack and tactical information on the visor to increase crew members’ situational awareness.

Since 2000, Boeing has contracted for more than 2,000 systems. The company is the prime contractor and integrator for JHMCS. Vision Systems International, a joint venture of Rockwell Collins and Elbit Systems, based in San Jose, Calif., is the major subcontractor.

The system completed first flights with the Swiss and Finnish air forces’ F/A-18 Hornets. First flights took place in Swiss F/A-18Cs on May 30 and Finnish F/A-18C/Ds on June 2 and 7. Switzerland and Finland operate 35 and 63 systems, respectively. First flights in Canadian CF-18s are scheduled for September. According to Phil King, Boeing JHMCS program manager. “The proven success of JHMCS in the field has resulted in a steady increase in customer demand.” Pilots first used the JHMCS operationally in Operation Iraqi Freedom.

In April 2009 Vision Systems International, LLC (VSI) announced it has received several new contracts with a total value of more than $120 million. Part of these orders relate to an ongoing contract awarded by Boeing, for the delivery of more than additional 550 (Lot 5) Joint Helmet Mounted Cueing Systems (JHMCS). The company has also won direct orders from the US Air Force and navy, for systems support. The new helmet systems will provide for the U.S. Air Force F-15E and F-16, Air National Guard F-15, U.S. Navy F/A-18C/D/E/F/G single seat and dual seat platforms, as well as foreign military sales production and spares commitments including: Australia (F/A-18), Belgium (F-16), Turkey (F-16), and other countries. Deliveries under FRP-5 will commence this year and continue through 2010. To date VSI delivered more than 3,000 systems.