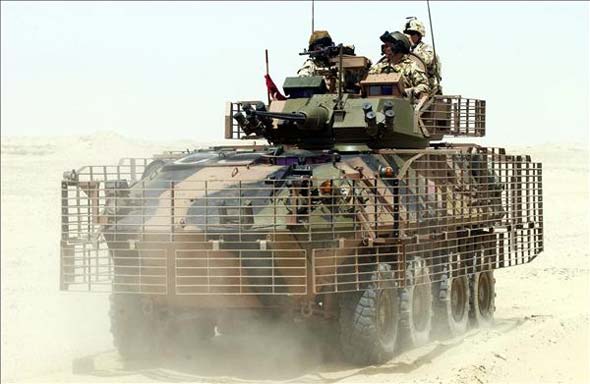 Australian defence is expecting to complete the A$35M Australian Light Armored Vehicle (ASLAV) program next week, delivering the last two upgraded vehicles to the Australian troops. 59 of the 62 ASLAVs deployed since 2005 to the Middle East have been fitted with the Protector Remote Weapon Stations from Kongsberg, mounting the 12.7mm heavy machine gun. Australia bought 59 Protectors for A$17.9 million. The vehicles received improved protection, fitted with “bar” (slat) armor and internal spall liners to better withstand blast, small-arms hits and fragmentation. In operational service the ASLAV fleet has achieved availability rates of greater than 90%.

The next modernization will be Phase 4 mid-life upgrade, which is expected to cost up to A$250 million which is currently in approval process. This phase will enhance the survivability and situational awareness capabilities of the ASLAV fleet with improved mine protection, spall liners and ballistic protection, introduction of battlefield management systems, and signature management. A surveillance version of the ASLAV will use the mast-mounted Multi-Spectral Surveillance System (MSSS) from DRS. ASLAV-S is currently in development and is expected to be fielded by 2008.

The DRS Multi-Spectral Surveillance System (MSSS) is a reconnaissance and surveillance package consisting of a laser rangefinder, thermal imager, and ground surveillance radar integrated with a stabilized common gimbal (SCG-100) and soldier machine interface provided by DRS. The MSSS will be capable of three modes of operation: mounted on the vehicle, connected to the vehicle by a cable, and completely dismounted. The MSSS package will be designed as a kit for installation on the ASLAV-S by the Australian Defence Forces.