A new concept, developed by FAR Technologies can apply to  various military aircraft, fighters and trainers, adapting existing fuel tanks to be carried under weapon stations. Under the patent pending design, an installation of fuel lines, flowing fuel from the outboard weapon stations (3 and 7 on the F-16) to fuel tanks pylons, (stations 4 and 6 on the F-16). In Israel, IAI/Lahav is promoting the implementation on the F-16 and is working on the necessary adaptations. The installation can be applied in only two hours, and enable the Falcon to carry a total of up to five external fuel tanks, reduce the need of air refueling, extend ferry range by 40% and add 25% to the mission radius (on attack and reconnaissance missions, for example),  and up to doubling endurance on combat air patrol missions. 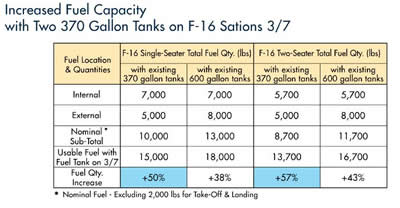 Israel’s IMI is also offering a higher capacity external fuel tanks (600 Gallon) for the F16, which can significantly extend the F-16 range, These tanks can replace the 370 gallon tanks or carried in addition to other tanks, especially on long haul ferry missions. However, the 600 Gal version cannot be dropped when the aircraft enters a dogfight and therefore, can be carried when the aircraft is armed for all aspect combat (when maneuvering relative to the target is not required), or maintained in relatively safe flight pattern (such as various mission support roles) or being escorted by other fighters. 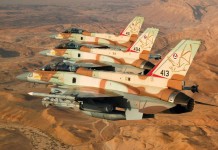