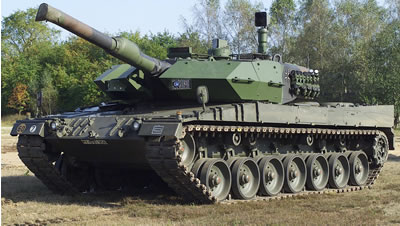 The prototype system is currently under development  under a technology evaluation of the Federal office of Defense Technology & Procurement (BWB). EADS Defense Electroncis provides the sensors, central computer and electronic countermeasures. Krauss Maffei Wegmann (providing system integration) and pyrotechnik countermeasures supplier Buk. During the test phase, the system was mounted on a Leopard 2 tank which successfully defended itself against various missile threats.

MUSS comprises three main elements: (1) warning sensors, based on EADS’ MILDS UV missile warning sensor and laser detector, which detect the incoming missile or laser beam directed at the target vehicle and report this to the (2) central computer of the MUSS system. This in turn activates (3) electronic or pyrotechnic countermeasures, to defeat and confuse the threat, significantly reducing hit probability.

MUSS weighs 65 to 160kg, depending on the equipment application, uses a combination of four sensors each covering an arc of 95×70 degrees, with a resolution of +/- 1.5 degrees. The sensors employ UV missile launch signature and laser detectors. When a threat is detected, the system responds within 1 – 1.5 seconds activating a smoke screen or directing infrared jamming signal toward the launching platform. During testing integration of the MUSS was designed for BOXER, FENNEK, and PUMA vehicles, as well as the Leopard 2A5 tanks.

The MUSS warning systemis based on a UV missile warning sensor and a laser warning sensor. Both are compactly contained in a single device (shown left) which makes  integration into the turret fairly simple. As a result, it is also much easier to retrofit old vehicles. The missile warner was specially designed for use in ground vehicles for the detection of various anti-tank missiles, including semi-automatic, fire-and forget and beam-riders such as AT-15 Kornet as well as unguided RPGs. It is based on the operational MILDS missile warning system originally developed for helicopters and aircraft. MUSS has demonstrated its effectiveness against various different threats during extensive tests, including testing on board the Leopard II main battle tank.

MUSS was selected by the German MOD to protect the new Puma armored infantry fighting vehicles. Initially, EADS will supply systems to equip the five prototypes currently in production.