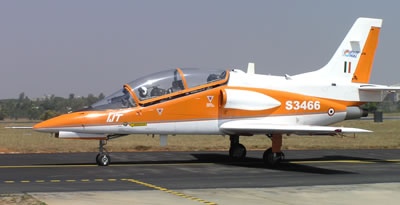 The stars of Aero-India 07 were the MiG twins – MiG-35 and MiG-29M OVT. The MiG-35 utilizes the basic MiG-29M aerodynamic design, enhanced propulsion, flight control and avionics. Compared to previous MiG-29 models, it provides significant improvement in flight range, maneuverability, and engagement capability of airborne and ground targets. The Indian Air Force is already flying 65 MiG 29 fighter jets, which are currently undergoing modernization under a US$ 400 million program. The upgrade could include improvement of the fighter’s capability of beyond visual range (BVR) engagement, improvement of the central computer and avionics, especially in ground attack functionality.

The Indian Navy has recently acquired 16 of the marine versions of the MiG 29K to be operated from the aircraft carrier newly acquired from Russia. The first aircraft will arrive in India in June 2007.
Boeing is offering the Indians joint production of the Hornet, the first time the company is willing to go that far in international cooperation. India has always insisted on the local production of a substantial number of the defense hardware it buys. India’s Hindustan Aeronautics Limited (HAL) is currently producing the Sukhoi Su-30 and MiG-series aircraft, as well as the British Jaguar and the Hawk trainer, to begin local production in 2008.

Most recently, India increased its order of Su-30MKI with an additional 40 aircraft, which could fulfill urgently needed aircraft replacement at some of the squadrons suffering the highest attrition, buying some time for the MRCA program to mature.

Indigenous development of aircraft and helicopters continues in India. The most prominent, alas longest program is the Tejas Light Combat Aircraft (LCA) family developed by HAL. Currently the fifth prototype is in final assembly and is expected to fly in August 2007, to be followed up by the naval version, slated to fly in 2008. A two-seater trainer version is one of the seven prototypes planned for the indigenously developed LCA. Production is gearing up for the low-rate initial production, with the first of eight Limited Series Production Aircraft (LSP-1) aircraft completed, making its ground runs at HAL’s facility at Bangalore in February 2007. The remaining seven LSP-1 aircraft will be delivered by 2008. These aircraft will be equipped with a foreign engine (GE F-404, same as the prototype’s powerplant) and non indigenous radar. The first aircraft of a batch of 20 production aircraft contracted by the Indian Air Force is scheduled to start rolling out of the HAL facilities from 2009-10, at a planned production rate of eight aircraft a year. However, the program continues to experience delays. Initial Operational Clearance (IOC) for LCA was recently pushed back o 2010. The first three prototypes are currently undergoing flight testing and integration. Three prototypes are currently flying, accumulating over 500 hours in test flights. Integration and flight testing of weapon systems is also underway. A model at Aero-India provided a glimpse of this work, equipped with missiles (R-73) and targeting pod (Litening).

The Jaguar upgrading program is also underway. 20 aircraft were upgraded through the Darin-II program, which included upgrades for the aircraft avionic systems. The aircraft also received new hardpoints, bringing the total hardpoints to nine, supporting enhanced weapon configurations. An inertial navigation platform and a digital map display are now included. While two prototypes of the subsonic aircraft are flying, the government has also placed an order for the limited series production of 12 aircraft.

Another indigenously developed aircraft is the HJT-36 trainer developed by HAL. This Intermediate Jet Trainer (IJT) is expected to become operational by 2008. 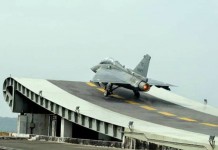