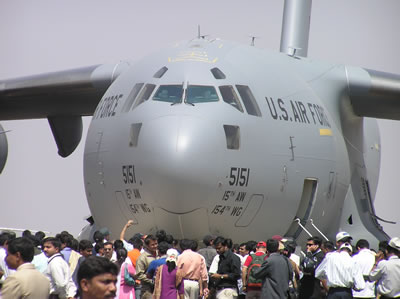 India has a large fleet of transport aircraft, but most of these aircraft have become obsolete and need replacement. On January 2007 HAL of India signed an agreement with Russian Irkut and Rosoboronexport companies, to participate in the development and production of the Multirole Transport Aircraft, (MTA). The twin engine aircraft will have a load capacity of 20 tons and will be designed for the transportation of military and commercial cargo. The aircraft will be designed to operate from most basic runways, including high mountainous areas.

While India is already pursuing joint development with Russia, of a transport aircraft, US companies are realizing the opportunity to offer modern transport planes for the near term. Lockheed Martin brought the C-130J Super Hercules to Bangalore, and Boeing demonstrated the C-17 Globemaster III. C-27 light tactical transport could also be considered as a replacement for the aging An-32, providing a near-term light transport replacement. EADS highlighted the fact that the Airbus M-400 could be an option for India’s medium transport fleet but its chances are slim, given the fact that India is already engaged in joint development of the Indo-Russian MTA.

Boeing is also promoting heavy transport aircraft and helicopters in India, and at the airshow the company displayed both the C-17 Globemaster III and the latest version of the Chinook helicopter, the new CH-47F.