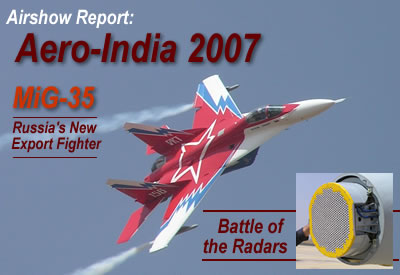 Aero-India took place early February 2007 at the Yelahanka air station near Bangalore. It was the sixth edition of this bi-annual airshow, and, by far the largest one, due primarily to the rapid growth of the Indian aviation market. Covering both civil and military, as well as the entry of U.S. aerospace companies, this became possible by opening previous government imposed restrictions to deal with India. These sanctions have been lifted recently, offering a huge market sofar dominated by Russian, to European and Israeli companies. In an effort to grab the Indian support and attention to its new hardware, Russia chose this event for the international debut of its latest MiG-35 fighter aircraft, which was unveiled in Russia only one month before the airshow.

According to a recent estimate published in the India Strategic monthly magazine, India will be spending some US$35 billion on military aviation over the next two decades. Plans include spending well over US$13 billion on the procurement of additional strike fighters and multi-mission aircraft, modernizing existing aircraft, and buying new attack helicopters, transport helicopters and transport aircraft. Fielding of a new systems, includes network – centric communications system, acquisition of advanced of precision attack systems, weapons, new UAVs and pursuing space programs and more…

Another interesting feature at Yelahanka was the participation of a large number of engineering and software industries that were eyeing the 30 per cent offset introduced into Indian defence procurement procedures. IT majors like Wipro, Infosys, HCL Technologies and Satyam, among others were there. Moreover, several foreign aeronautics majors would also seek partners from among these small and medium companies. 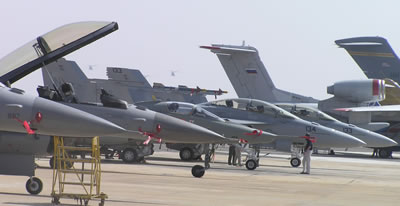