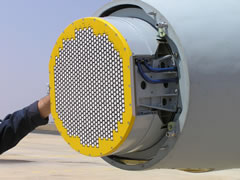 India declared that Active Electronically Steered Array ( AESA) radar technology will be a “must have” item for every MRCA contender. This requirement excited both aircraft and radar manufacturers, creating some odd combinations. One such combination is the rumored alliance between RAC-MIG and Israel Aerospace industries’ Elta Systems, developing a more advanced, powerful AESA radar that could be fitted into the MiG-35, as well as to future Indian fighters. While Russia is offering the Zhuk AE AESA radar for the MiG-35, the main advantage of the Israeli system could be its openness – Elta has not committed the radar to a specific platform, and therefore, India could gain access to the system’s programming code which is another requirement that some companies, particularly from the U.S., could find difficult to provide.

AESA radars are emitting not only radar signals, but can also be employed for non traditional ISR, as well as electronic attack. For example, some of the elements can transmit and receive signals modulated with datalink waveform, transferring large amounts of data (such as live video or aerial imagery) over high bandwidth datalinks. Similar techniques can be used for electronic attack, to jam or deceive electronic systems operated by enemy forces.

The mechanical scanning systems used in previous systems were prone to failures, which grounded the entire aircraft. The new systems use solid-state technology and electronic scanning, to replace the mechanical systems but also introduce multiple elements to replace the single channel design of previous systems. Therefore, AESA radars can sustain certain degree of failure without grounding the aircraft or disabling the entire radar system. Furthermore, when designed with modular approach, AESA radars can be gradually upgraded, by replacing the solid-state receive/transmit modules based on Gallium-arsenide semiconductors technology with more advanced elements, thus significantly improving performance.