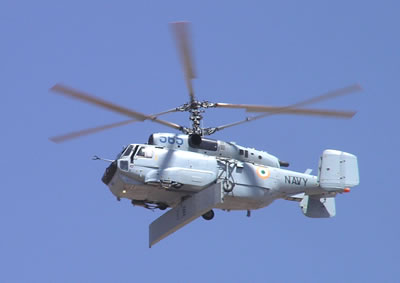 The flight display at Aero-India included several aircraft flown by the Indian Navy, including the modernized Ilyushin Il-38 and Tupolev Tu-142MK-E, showing the progress of the Indian naval aviation arm. All five Il-38s currently in Indian Navy service are being upgraded to the Il-38SD configuration. The aircraft carries the Russian made multi-function “Sea Dragon” (Morskoi Zmei) radar mounted in the belly bulge, offering surveillance range of up to 320 km from high altitude. This radar is also capable of detecting aircraft targets at about 100 km, while tracking up to 32 targets. The distinctive Electronic Support Measure (ESM) array mounted above the fuselage is produced by the Russian company Morskoi Zmei. ESM provides the capability to passively detect targets. A stabilized optronic payload is installed under the nose. Future modification of this aircraft could include new weapons, such as the BrahMos missile, of which each of the Il-38s could carry two.

The Russian Tu-142MK-E Bear-F Mod 3 Export version operated by the Indian Navy are equipped with the Elta EL/M-2022A (V)3 maritime surveillance radar, capable of detecting and identify (by ship profile) large surface vessels at ranges up to 400km. It has a track-while-scan capability of up to 100 target track-while-scan capability. is quite a unique feature. Few years ago, India was interested in acquiring Russian Tu-22M3 Backfire bombers for long range maritime surveillance and strike. However, these plans have been shelved. The Indian Navy is interested in acquiring Airborne early Warning systems, to augment the limited capability provided by the Ka-28 Helix AEW helicopter deployed with the aircraft carrier INS Viraat currently operated by the Indian Navy. Northrop Grumman is proposing the E2D Hawkeye 2000 for this role, this aircraft could operate from larger carrier decks, such as that of the new aircraft carrier INS Vikramaditya, to be transferred from Russia in two years, or from the INS Vikrant, currently under construction at Cochin, slated for operational deployment by 2012.

Indian aerospace activity is not limited to naval and air activities, but will soon extend to outer space. The Indian Air Force is in the process of establishing a space command, which will be responsible of operations and control of the country’s space based assets. The command will combine various components like satellites, radars, communications systems, and fighter aircraft and helicopters, IAF officers said.