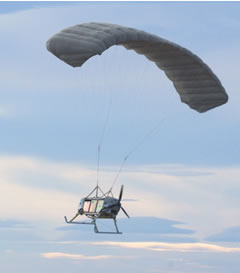 Aerovironment Hawkeye Unmanned Logistics Aerial Vehicle (ULAV) is a tandem wing glider designed to covertly deliver critical payloads to ground personnel. It is designed for standoff, high-altitude, air launched deployment. This expendable glider is designed to fly autonomously or under remotely piloted for up to 80km, reaching its payload delivery point with high precision. Hawkeye demonstrated a payload delivery capacity of 25kg. Other larger capacity variants are currently being explored, and include optional propulsion systems to extend endurance and range. An alternative approach is the CQ-10A SnowGoose, a military version of the powered Sherpa, suspended under a all supported by rectangular ram-air parachute, powered by a rotax 914 piston engine and guided by GPS-based navigation and control system. The CQ-10A can be airdropped or launched from the ground, over a modified Hummer. The SOCOM is operating 36 Snow Goose vehicles since 2004. The UAV has six cargo bays with a total payload capacity of 600 lbs (270 kg). SnowGoose can climb to an altitude of 18,000 feet (5,400 m’) and remain in flight for up to 20 hours.

ULAV can be used for delivering cargo, fly surveillance missions or deploy sensors or communications relays, offering mission commanders enhanced aerial flexibility and performance with a single multi mission and multi task system. However, its primary mission is delivering leaflets in support of Army and joint service PSYOP activities. CQ-10A reduces the risk to manned aircraft in delivering leaflets, while offering greater delivery precision than a C-130 and an estimated 20 to 1 cost advantage over manned delivery options.

According to Sean McCann MMIST’s President and CEO the aircraft has an interesting role in the rapid and timely delivery of critical loads such as medicines. “The supplies can then be delivered by precision aerial delivery system to forward locations where they are unpacked and loaded on individual ULAVs and distributed by to individual each team in the field.