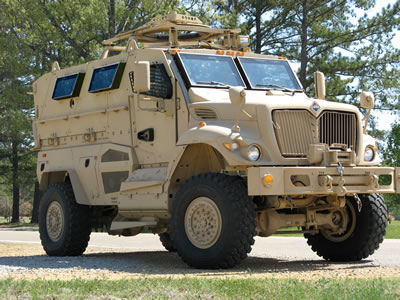 International Military and Government LLC, of Warrenville, Illinois received a fourth production order for 755 Mine Resistant Ambush Protected (MRAP) Category I vehicles. The current $414 million contract brings the total orders awarded to IMG to over $1.045 billion, placing it the first place among all MRAP suppliers. The Pentagon expects to receive all vehicles produced by IMG, including 1,971 Category I and 16 heavier (Category II), before February 2008.

As the largest commercial truck and mid-range diesel engine manufacturer in North America has the capacity and experience to produce vehicles at a high rate. assures Daniel C. Ustian, chairman, president and CEO of Navistar International Corporation. He said the company is working with the U.S. military and its supply base to increase our production capacity at our facilities to meet the aggressive demand and expedite MRAPs to the troops as quickly as possible.

“we produced over 161,000 commercial vehicles last year, we know how to mass produce quality vehicles, we manufacture our own diesel engines, we’ve forged strong relationships with a number of key suppliers, and we provide comprehensive global parts and service support for these trucks.” said Archie Massicotte, President of International Military and Government, LLC. (IMG), the division producing the new MRAPs.