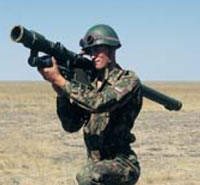 Igla Man-Portable Air Defense System (MANPADS) designated The SA-18 Grouse by NATO, was first deployed in 1980 as a successor to the ubiquitous SA-7 Strela missile system. The system utilizes the 9M39 missile and is currently available from the Russian state company KB Mashinostroyenya (KBM). A naval version, designated SA-N-10 Grouse ( Igla-M) is provided for naval boats. Igla and its improved derivatives It is designed to engage aircraft, helicoptera and unmanned aerial vehicles. 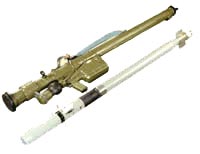 An improvement of the SA-18 is the Igla-1 (NATO Designation SA-16 Gimlet). This missile feattures a new seeker and modified launcher nose cover. Instead of the aerodynamic spike used in the 9M39 missile, the SA-16’s 9M310 missile uses an aerodynamic cone held in place with a wire tripod. According to globalsecurity, the further improved 9M313 missile of the SA-16 employs an IR guidance system using proportional convergence logic, and an improved two-color seeker, presumably IR and UV). The seeker is sensitive enough to home in on airframe radiation, and the two-color sensitivity is designed to minimize vulnerability to flares.

Igla 1 weapon system consists of the 9M310/313 Surface to Air Missile, contained in the sealed launch tube, and 9P516 launching subsystem. The launch tube can mount a night sight and an IFF interrogator.

Igla-S MANPADS system has the same weight and size as the predecessor, as well as launch preparation and maintenance procedures. The new missile uses the 9M39’s aerodynamic spike design, but is fitted with much improved seeker and digital guidance systems offering imporoved head-on engagement capability, better immunity to advanced thermal countermeasures and better handling of background clutter. As the earlier systems, Igla-S can be prepared for launch within 13 seconds. Igla-S can engage large and small, low flying targets, including UAVs and cruise missiles, intercepting at closing speed as fast as 400 m/sec (head on) or 320 m/sec (in tail chase). Igla-S entered production in 2004, for the Russian Army and export. Operator training can be provided by the 9F859 Konus versatile simulator, developed specifically for the Igla-S system. It also includes training means for Igla and Igla-1 system operators.

The Igla-1 / Igla-S missiles can also be mounted on the Strelets launcher. This a vehicle mounted system can be loaded with four, six or eight missiles, and target acquisition systems, remotely controlled from within the vehicle or by remote console. The system is designed to enable simultaneous firing of missile salvos against a target, therefore increasing kill probability by improving the missile’s no-escape zone. Each Strelets module comprises two missiles. The kit includes two to four modules enabling the gunner to fire up to eight missiles successively or in a salvo.

According to Russian sources, the Igla-S has already been exported to Vietnam which has also received licensing and technology transfer for local production of the missiles. Singapore has also procured the Igla-1 system.