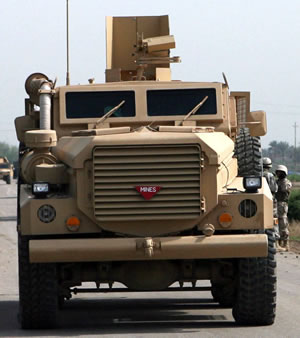 While MMPV is designed for the specific use by combat engineers, MRAP should offer more capabilities. Yet, it is designed primarily as a protected vehicle, and this capability comes with a price, not only in US$, but also in mobility. MRAPs are designed for aerial mobility inside large military transports, as well as C-130, (the first production vehicles are expedited to Iraq by airlift). However, these heavy vehicles will consume excessive capacity of the limited airlift assets available to US forces. In fact, a MRAP requires as much space as a Bradley armored vehicle, and even more space than the Bradley’s future successor, the Mounted Ground Vehicle (MGV). For the Marines, MRAP poses a serious challenge as it is much too high for safe accomodation on shipping vessels, therefore limiting the numbers and use of storage space in the lower decks. If the military plans to use MRAPs beyond the current conflicts in Iraq and Afghanistan, they must plan and field enough airlift and sealift capacity to deploy these heavy vehicles. 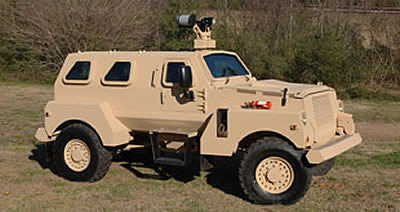 Another consideration is the combat effectiveness of the vehicle. In practical terms, MRAP is a monster. Noisy, slow, big and hot, this vehicle is the opposite of modern tactical vehicle designs. The entire concept is designed for defensive, rather then active-offensive role, motivating troops to encapsulate within the relative safety of well protected vehicles, resulting in less effective control of their surrounding. Therefore, when hit by an ambush, they would take more time to recover, assemble and strike back. By no means should troops be unprotected in such missions, but they should not sacrifice their mobility or situational awareness either, they should be equipped with the best combination of protection, mobility and firepower to gain and maintain the upper hand under all battle conditions.

The heavy armor is offering the safety and security for the troops inside, offering good visibility of the area through the surrounding windows, which also have some firing ports and remotely controlled weapon station on top, enabling the crew to employ effective counter-fire. However, the vehicle also poses a big, clear and lucrative target – its noisy engine and high silhouette are clearly distinguished from a distance. Based on an automotive system of a heavy truck, its acceleration, turning radius, negotiating gradient and vertical obstacles is limited, especially in confined areas and narrow streets or in situations requiring the vehicle to go off-road. The height, contributing to the effective IED protection, also restricts the weapon station’s coverage. Fortunately, firing ports installed on both sides enable the crew to cover this area with their personal weapons. The high ground clearing and lack of side doors pose some difficulties for embarkation and dismounting with full combat loads. (In contrast, the ASV which has not been selected for MRAP, has doors on both sides and back, enabling troops to always move in or out of the vehicle under cover).