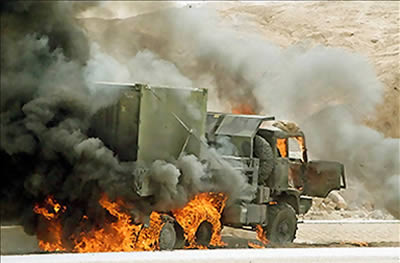 No armor is capable of rendering total protection. Armor is designed as a combination of one or more materials constructed into a system, designed to defeat specific threats with high probability of success. Different armor materials have their strengths and weaknesses. Metals (mainly steel) offer effective protection from small arms threats and have reasonable multi-hit capability, but is relatively heavy. Ceramics such as alumina, boron carbide, titanium oxide are lighter than steel and when produced into smaller panels, have good multi-hit capability, but the material is degraded after sustaining certain hit damage.

Composites are both lightweight and offer good multi-hit protection. Today, the stopping power of composites is limited due to practical considerations (size, weight and cost) but future fibers are expected to increase the strength bringing advanced composites to equal, and even surpass the protection levels of steel and ceramics. Composites also have the advantage of being able to be shaped into larger, curved structures which is not the case with most ceramics. Some composites also contribute to reduce behind-armor interior damage effect (spall, blunt trauma). Certain composites can be formed into blast mitigating structures reducing blast effects.

When used in combination with ceramics, they also improve the ceramic’s damage tolerance in multi-hit attacks. Such combinations of armor materials provide the ‘first line of defense’ against most threats, including small arms, fragments, and simple explosives.

Buried ‘belly charges’ pose even more complex threats, utilizing devastating ‘mega-IEDs’ weighing hundreds of kilograms, they can take out heavy armored vehicles, including tanks. Since they are activated below the vehicle, most of their effect is directed upwards, at the target. When such charges rupture the target’s bottom hull floor, the internal effects are devastating. Some improvised belly charges are made from cylindrical containers such as water tanks filled with explosives; the cylindrical shape and explosive’s design create directional effect, focusing most of the explosion upward at the target. Furthermore, the barrel-shape is easier to handle in the field, enabling small team to roll it into position and rapidly emplace it below the surface.

Other mega IEDs are the Vehicle Borne IEDs (VBIED) operated by suicide bomber or remotely controlled, VBIEDs were used with devastating efficiency since the early 1980s in Lebanon, and since then, proliferated worldwide, used by terrorists and insurgents. The VBIED uses the vehicle’s mobility, momentum and loading capacity to form a deadly ‘guided weapon’, which can break through roadblocks into a protected perimeter, to explode inside a well defended target. Recent incidents in Iraq included dual-effect VBIEDs, where vehicles were loaded with chemical substances in addition to explosives, dispersing lethal gases to enhance the bomb’s effect. A ‘dirty bomb’, if ever employed by terrorists, could follow this principle of attack. 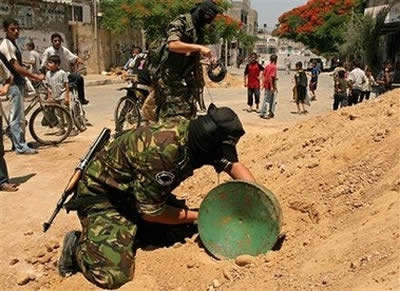 Directional IEDs are the Road-Side IEDs (RSIED) utilizing EFP and EFF. These weapons combine a conically shaped explosive charge covered by a metal liner. When activated, the explosion forms the liner into a projectile that blasts into the target with high kinetic energy. EFPs placed at the road side can hit vehicles traveling on the road. Usually, EFPs are employed against ‘quality targets’, where insurgents aim exactly at certain areas of the target where they expect to cause the desired effect. Insurgents are trying different tactics to lure potential target into the EFP’s kill-zone, such as emplacing dummy IED or clearly visible ‘IED baits’ to get more forces into a well orchestrated killing field known as ‘IED arena’.

As charges are laid down to attack a point where insurgents expect security forces to stop, they can employ several IEDs pointing at one target, or multiple charges linked through a ‘daisy chain’ to achieve an effect over a larger area, or attack a certain length of the road, where a convoy is expected to pass or forced to stop. While the EFP employs a single projectile, other directional IEDs known as EFF can generate multiple projectiles or ‘fragments’, while the most devastating ‘multislug’ explodes into several projectiles aimed roughly at the same point – the first devastates the armored vehicle and the second penetrates and kills the target. RoadSide Improvised Explosive Devices (RSIED) are activated by various types of triggering mechanisms, from pressure plates, electrical wires, and various types of wireless devices or, ultimately, autonomous guidance and control by using a trained human, committing a suicide act.

IEDs do not go off by chance. Meticulous tracking and recording of every engagement provides insurgents with valuable feedback for future actions. The art of battlefield intelligence was mastered by Hezbollah in Lebanon through the 1990s, where units employed video cameras to record combat activities. While the main reason for these actions was to capture ‘victory photos’, analyzing the footage could provide a lot of information for debriefing and further improvements. Similar actions were ‘exported’ to the Gaza strip, and are considered a central element of insurgent operations in Iraq. Distribution and analysis of the data by experts and rapid dissemination, via human channels and electronic means provides insurgents with a powerful and adaptive strategy and improvement. As such functions are embedded into ordinary mobile phones; modern insurgency is becoming network-centric, driving an ever steeper learning curve.