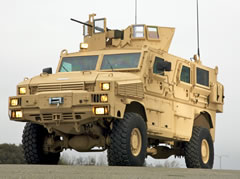 The current Mine Resistant Ambush Protected (MRAP) vehicle is built as a mine protected, bulletproof heavily armored truck, offering reasonable highway mobility and off-road capability in an urban and open combat environment. The MRAP is designed to provide the crew with a comprehensive protective envelope.

In this design, some of the truck’s payload capacity is traded off for the armor suit, while retaining capacity for mission payload. Utilizing a standard 20 ton Mack chassis, rigged to carry the heavy armor and endure explosions, the vehicle uses a V shaped armored hull, deflecting the blast from underneath the vehicle. The hull is designed to withstand the mine blast effects without breach of the bottom floor when a mine is detonated under any wheel or directly under the crew compartment. Thick bullet-proof steel plates are welded to create the body, offering effective blast mitigation while protecting from fragments and debris. Even after suffering significant damage, the MRAP can continue moving, having ‘residual mobility’ using Hutchinson runflat tires, fitted with steel inserts, retaining residual mobility to break contact. The MRAP is capable of traveling 30-miles (48 km) at a speed of 30 mph (48 km/h) on a hard surface road after complete loss of air pressure in any two tires. However, the larger 6×6 MRAP is quite limited in its ability to navigate in confined areas, where a smaller vehicle is required. For such missions the military will utilize the 4×4 MRAP, which has the same protection but uses a smaller wheelbase offering better mobility and steering. 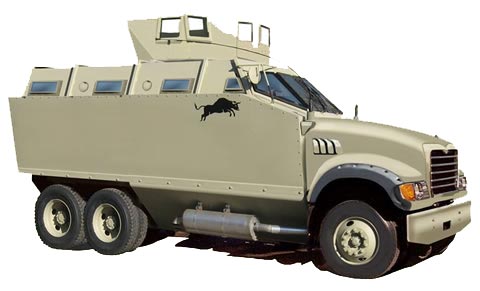 Further improvements are expected to be fielded with the next model of MRAP, expected next year. The Marine Corps Systems Command is planning to buy up to 20,000 improved MRAP vehicles, currently known as MRAP II. This vehicle will offer enhanced performance and protection against more sophisticated threats. The Marines are planning to test some of these vehicles this autumn and awards for initial orders for the MRAP II are expected by January 2008.

Current MRAP vehicles consist of three categories: Category I vehicles (6 persons or more including driver) support operations in an urban environment and other restricted/confined spaces; including mounted patrols, reconnaissance, communications, and command and control. Category II vehicles carrying 10 persons or more, including the driver will provide a reconfigurable vehicle that is capable of supporting multi-mission operations such as convoy lead, troop transport, ambulance, and combat engineering. Category III (Buffalo) is designed strictly for explosive ordnance disposal missions.

All MRAP models are required to travel distances of 300 statute miles (480 km) at a cruising speed 45 mph (72 km/h). Road speed is 65 mph (105 km/h), 25 mph (40 km/h) on unpaved trails or five mp/h (eight km/h) off-road. The vehicles are required to ascend a paved road at a 40% grade at a speed of 10 mph (16 km/h) and descend a 60% longitudinal grade maintaining a speed of two mph (three km/h). MRAPs are designed to fit for self-deployment on highways worldwide and be transported by rail, marine, and air modes in C-17 and C-5 aircraft. Some of the models could also be prepared for transportation in C-130 aircraft after 60 minutes of preparation.