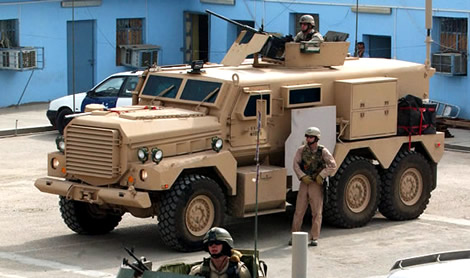 By the early 2000s, a new class of ‘mine protected vehicles’ was introduced in the US, and slowly fielded to support combat in most high-risk deadly missions of Explosive Ordnance Disposal (EOD) units. Initially, mine protected vehicles such as the Buffalo, built by Force protection inc. were supplied to Explosive Ordnance Disposal (EOD) teams which handled the removal of IEDs in Iraq. These vehicles were designed from the outset to survive mine blasts and explosions and protection against small arms fire. In addition, the Army fielded some route-clearing vehicles, utilizing the South African Meerkat (Husky) system.

The US Marine Corps were faster to identify the need for a mine and explosive protected vehicle, fielding smaller Mine Protected Vehicles also developed by Force Protection – the Cougar. Initially the corps selected the heavier 6×6 vehicle, configured to carry EOD teams. Since these vehicles were specifically planned for EOD missions, they were designed as highly protected, but heavier and less mobile platforms, more flexible to handle suspicious objects rather than employing firepower.

Soldiers liked these monsters, and commanders repeatedly stressed their desire to get more Cougars in theater. However, due to the limited production capacities, only few trickled through to the frontline troops. Their survivability brought the Cougars to become favorable troop transporters, employing their unique protection as lead elements for convoys and road patrols. The fact that no marine was killed in a Cougar, despite more than 300 attacks on the vehicle, led Secretary of defense Robert Gates to press the Army to dramatically increase its plans to field a new family of vehicles, based on the USMC Mine Resistant Ambush Protective (MRAP), to fill urgently needed protection gaps protecting troops deployed in Iraq.

Gates, directed the services to regard the MRAP program as urgent requirement, encouraging them to buy as many vehicles as the industry can produce. Therefore, the Army could get some 17,000 MRAPs, making this vehicle the third largest acquisition program in the next two – three years. Originally the Army planned to buy around 3,000 vehicles, since two parallel programs, Medium Mine Protected Vehicle’ (MMPV) and Joint Light Tactical Vehicle (JTLV) would have closed the current vulnerability gap within few years. By 2010, with over 22,000 MRAPs in service, the funding and justification for the procurement of thousands more new vehicles will certainly be questioned.

In the years 2008 – 2010 the US Army planned to expand the fielding of these mine protected vehicles, through the introduction of the Mine Protected Vehicle (MPV) family, consisting of the Buffalo Mine Protected Clearance Vehicle (MPCV), a Vehicle Mounted Mine Detection (VMMD) system, based on a more advanced version of the South African vehicle, and a new class of vehicles designated ‘Medium Mine Protected Vehicle’ (MMPV). This vehicle will be designed to mobilize the Future Engineer Force (FEF) – a ‘transformational’ combat engineer unit that will provide route clearing, breaching and other engineer services to all combat formations, including the future Brigade Combat Teams (BCT) and Heavy Brigades. The army plans to deploy over a thousand MMPVs in the next five – seven years, forming 12 combat engineer companies. Some of the units will be embedded with Brigade Combat Teams (BCT), support brigades and division corps headquarters while others will form engineer force pools.

MMPV will be designed as blast protected wheeled vehicle, assuring the FEF full mobility in ‘explosive hazardous’ environments, also operating in route and area clearance operations, deactivating IEDs and other explosive hazards. In contrast to the MRAP designed by the US Marine Corps as an urgent requirement, fulfilled by multiple producers, in different models – the Army MMPV program will be awarded to a single contractor scheduled to provide at least 1,030 field-proven blast protected armored vehicles.