Sophisticated IEDs pose a significant challenge to armor designers, since they are less predictable in nature. Yet, advanced armoring concepts are being fielded, offering improved protection against the myriad of threats posed by an EFP, while reducing the total weight of the armor. Several counter EFP armor materials have been introduced recently. In the USA, PVI recently demonstrated its ShieldAll as an effective counter EFP material while Ceradyne introduced its own counter EFP armor with its new Bull armored vehicle. In Israel, RAFAEL is believed to have designed and operationally deployed armor capable of countering EFPs, According to the Golan armored vehicle manufacturer, PVI, RAFAEL’s EFP armor is also used in its Golan vehicle, selected for the US MRAP program. IMI is offering another counter EFP armor known as “Iron Wall’ in the new Urban Fighter up-armored M-113 program. 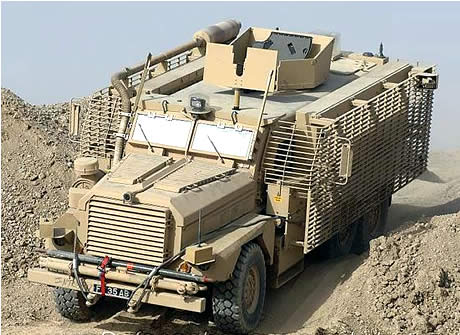 IMI built the new armor from hybrid, passive modules, combining several materials designed to absorb the kinetic energy, mechanical deformation and ballistic damage created by the threat by mitigating and dissipating blast energy, and absorbing the kinetic energy of projectiles, fragments and EFP slugs, stopping multiple hits from small and medium caliber projectiles which is equal to 45-up to 60 mm of Rolled Homogenous Armor (RHA) while weighing half the weight of comparable steel. Due As EFPs rapidly becoming a major threat in most theaters, more companies are expected to field new defenses against this menace.

The shaped-charge threat poses a different risk. Triggered by percussion fuze the conical warhead forms into a molten jet that can penetrate thick steel armor. To protect against these, armor designers employ various means to avoid contact with the incoming warhead. The slat armor ‘cage’ provides a passive anti-RPG armor which effectively keeps most RPGs away from the protected vehicle. Reactive tiles provide similar protection by triggering a ‘counter-explosive’ which disrupts the RPG’s fuse, causing premature explosion or deactivating it by smashing the ogive. Another concept is active protection, utilizing various interceptors to eliminate the threat at a safe distance. Active protection is considered the only reliable protection from tandem warheads.

Protection against these weapons is much more complex, and requires a mix of physical means, countermeasures and operational procedures. 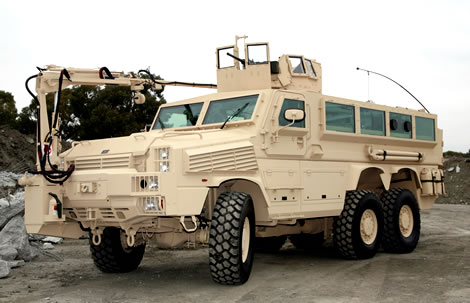 While the US Army neglected its light vehicle armoring, other armies did not follow opted to equip their vehicles with bullet-proof protection. As the threat level increased in Afghanistan, mine and IED protection had to be added to bring their units up-to-date with the threats. The solutions were mostly similar to the US choices, mostly focusing on the RG-31 and Cougar models for the Canadian and British forces. Interestingly, the South African companies that led this market are selling some vehicles to civilian contractors but rarely to the militaries. South African based OMG which produces the RG-31 MPVs and RG-33 MRAP models is now operated under BAE systems.

The German and Italian Armies fielded several models of indigenously developed mine protected vehicles. Among these are the lightweight LMV and Dingo, designed for command vehicles, liaison and patrols. The German Army is saving no effort to protect its vehicles. Protected cabins and command and control shelters are fitted to supply trucks, heavy transporters, and light vehicles. Some models were designed specifically for troop transport, including the Dingo II from KMW, and future GEFAS concept vehicle, developed by Rheinmetall Defense (RDE). KMW is also developing a new mine protected vehicle designated Grizzly, to address the German Army requirements for highly protected vehicles.

The Australian Army uses the indigenously developed the Bushmaster mine protected vehicle for troop transport and patrol duties. This bullet-proof vehicle was designed to offer effective mine protection, utilizing the V Hull design, while the slat armor added in theater provides improved protection against RPGs. 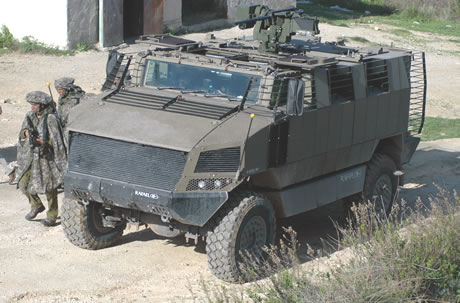