The Multiple Launch Rocket System (MLRS) M-270A1 program was developed and produced as a multinational program since 1976. The original partners (France, Germany, Italy, the UK and USA) continued the cooperation into the current Guided MLRS (GMLRS) program, which pursue more accurate guided rockets using fewer rockets to achieve the effect while reducing collateral damage. Each GMLRS is equipped with a GPS/IMU guidance system and small canards installed on the rocket’s nose to provide basic maneuverability and enhance accuracy. The latest version of GMLRS will be equipped with a unitary warhead, to further reduce collateral damage (generally associated with scatterable munitions). GMLRS completed development in 2001 and since 2005 is in full rate production for the US forces. The US Army is planning to procure more than 100,000 GMLRS rockets. The new rocket has a range of more than 70km. Lockheed Martin is currently producing Block 1A missiles to replenish depleted stocks, under a US$47 million order by the U.S. Army. In December 2006 Lockheed Martin received additional $78 million for GMLRS production in 2007.

The current GMLRS warhead uses a cargo of 404 Dual Purpose Improved Conventional Munition (DPICM) bomblets. The development of a 180 pound unitary warhead is in progress. Several versions of multi-effect warheads are currently considered by the US forces and other MLRS users.

One result of Dual Purpose Improved Conventional Munitions (DPICM) inefficiencies was the urgent requirement set by the U.S. Army, for 496 guided Multi-Launch Rocket Systen (G-MLRS) rockets carrying a unitary warhead developed by General Dynamics. The unitary warhead is currently in the system design and development phase, which will continue through 2007. General Dynamics will also supply these warheads until year 2020, under a contract awarded by the US Army in July 2006. The warhead uses a tri-modal fuse, enabling airburst, point and delay activation. Airburst effectively covers wide area with more focused footprint and, compared with DPICM loaded MLRS, it is more accurate and leaves a clean battlefield after the attack. Delay activation enables effective penetration of rooftops and structures, improving effectiveness and reducing collateral damage, when employed in urban environment. When fitted with a 200 lbs (90.7 kg) unitary warhead and an inertial guidance for precision impact, G-MLRS is classified as “low collateral damage” weapon.

An advanced version of the GMLRS’ unitary warhead could use the Enhanced Blast Warhead (EBW) developed by Lockheed Martin. When exploded, this warhead creates an over-pressurization effect (similar to a thermobaric charge). This effect devastates enclosed structures but has less effect on adjacent buildings, therefore, reducing the risk of collateral damage. This version of GMLRS is designed to strike targets at a range of over 70 km. EBW will also have improved penetration capability, enabling the rocket to go through several floors of conventional buildings before exploding in the basements.

The U.S. Army used the M-30 Guided MLRS in recent combat engagements in Iraq, demonstrating devastating effect of the 196 lbs (89 kg) unitary warhead, minimal collateral damage and an element of surprise, utilizing its maximum range of 43.5 miles (70km), a combination that would not be achieved by tanks or other direct fire elements.

In June 2007, the U.K. Ministry of Defence (MoD) awarded Lockheed Martin three contracts for the delivery of Guided MLRS systems. The contracts are part of an incremental, multi-year acquisition program worth more than £250 million. The current contracts include rockets, upgrade kits, spares and support, including12 MLRS M270B1 launcher upgrades and Guided Unitary rockets. The first new launchers have been delivered and training and testing of the new system and rockets is under way in the U.K. and U.S., respectively. Similar units have been in operation with the U.S. Army since 2002. 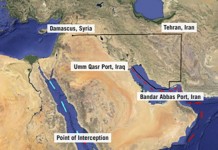