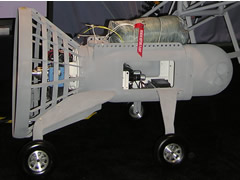 A concept for a Long Endurance Autonomous Powered Paraglider (LEAPP) is developed under a DARPA program demonstrating a cost effective alternative for fixed wing, long endurance loitering ISR capability. The system is developed by Altair. LEAPP was unveiled at the International Special Operations Forces Week this year, and was shown at AUSA 2006 in its full configuration. The parafoil system will be capable of loitering over an area for periods of up to 48 hours.
Altair is considering LEAPP to address various missions with three categories. The largest version will be a slow flying long endurance platform, which could accommodate two men, and be ground transported by a HMMWV. The system will use the largest paraglider wing ever built, spanning over 112 ft. (34 m’) The vehicle will be able to take off from a ground clearing of 50 – 100 ft (15 – 30 m’) or air dropped from C-130 or C-17 from an altitude of 35,000 ft. (10.5 km). LEAPP will be able to stay on a mission for 48 hours and carry mission payloads of up to 200 lbs, in addition to 2,145 lbs (972 kg) of fuel.

A smaller version (LEAPP Type II) will be optimized for shorter missions (u to 24 hours). It will have a gross maximum takeoff of 1,550 lbs (703 kg), compared to 3,000 (1.4 tons) for Type I. It will also be operated aspiloted/pilotless autonomous, and will be able to carry 200 lbs (90.7 kg) of mission payload but significantly less fuel.

The Micro LEAPP (Type III) is a much smaller vehicle, with a maximum gross weight of 75 lbs (34 kg), it will have a payload capacity of 30 lbs (13.6 kg), and mission endurance of four hours. The vehicle can be launched and operated by a single operator. For takeoff, Micro LEAPP requires only 5 – 10 meters of clear surface.