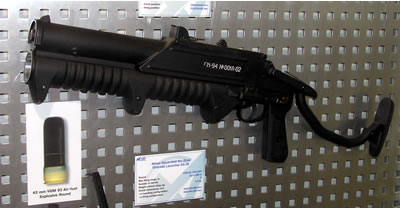 KBP displayed at Defendory 06 an interesting range of 43mm rifle launched grenades, one of the most innovative was the GM 94, capable of firing thermobaric VGM-93 grenades, which can be used inside confined areas. The grenade is loaded with 160 grams of thermobaric mixture, creating a devastating lethal effect at a radius of 3 meters, but maintain a safety zone for the user, at a distance of only ten meters from the explosion center. The VGM-93 43 mm grenade is designed for the GM-94 magazine loasded grenade rifle. This weapon is designed as a support weapon. It can be loaded with four grenades, three in the magazine and one in the chamber. Weight is 4.8 kg, and the length, with butt folded, only 540mm. In addition to the unique thermobaric munition, GM-94 also fires high explosive fragmentation, smoke, and non-lethal munitions. The weapon is equipped with a mechanical sight, effective to 300 meters.