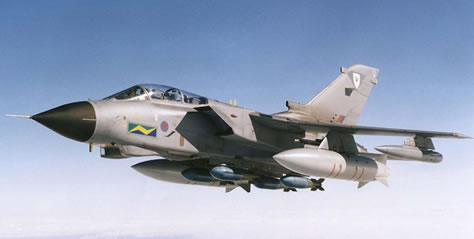 The RAF will upgrade its strike aircraft installing secure communications and datalinks in Tornado GR4 and Harrier GR9s. The British Ministry of Defense announced the two programs this week (January 14, 2008) at a cost of about £350 million.

TIEC is an implementation of NATO standard Link-16 Joint Tactical Information Distribution Standard (JTIDS), integrating the Link 16 and Improved Data Modem (IDM) on the aircraft. TIEC was developed by an industry team formed in 2004 by BAE Systems Customer Solutions and Support, including General Dynamics UK, Rockwell Collins UK and US based Innovative Concepts Inc. The tactical data link send operational information in text format direct to the cockpit, enhancing the crew’s awareness of the surrounding situation and reducing the possibilities of friendly fire engagements. The improved secure communications will allow pilots to talk securely to air controllers on the ground, the AWACS surveillance platform as well as other combat aircraft on the same operation, thereby minimising the risk of hostile forces intercepting information.

Under the £253 million Capability Upgrade Strategy (Pilot) program CUS(P) the Tornado GR4 will receive a similar communications suite comprising the secure communications, and TIEC channel and, an integration of new, enhanced laser/GPS Paveway IV precision guided weapons made by Raytheon.

The contract is only the first phase of the CUS(P) program, which is expected to follow with the introduction of a targeting pod (the RAF evaluates both Litening III which is already integrated with the Tornado and Typhoon, and locally supported by Ultra Electronics and the Sniper from Lockheed Martin, used with the Harrier GR9. According to Aviation Week & Space Technology, Future upgrades to be considered under CUS(P) also include the ntegration of a new active AESA radar.