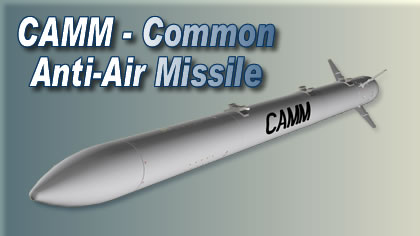 MBDA has been involved in preliminary studies to define and develop a common solution for such anti-air target guided weapons, used for naval, land and aerial operations which could be implemented in a future system currently known as CAMM – the Common Anti-air Modular Missile, to be fielded within 7 – 10 years (2015-2018). The missile family considered for CAMM will comprise a common missile and modular standard subsystems utilized across several systems, contributing to cost savings in acquisition and logistical support. Systems design and integration will be based on an open architecture, further contributing to ease of incremental upgrades, eliminating potential future obsolescence in capability, functionality and technology thereby enabling an extended life. 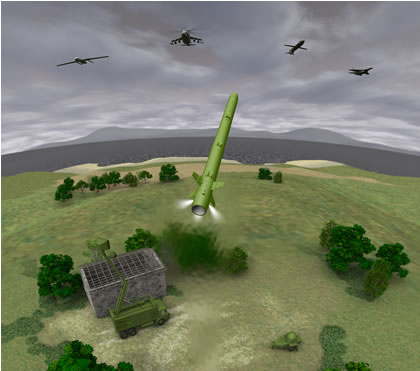 This approach has already been established with the PAAMS (Principal Anti-Air Missile System) naval area defense weapon system. CAMM follows this approach by re-using software and adding new low cost components. For Land and Sea applications the low footprint and low cost Soft Vertical Launch SVL is offered. In the naval application, CAMM could provide timely replacement for the Sea-Wolf missile, whose effective service life with the Royal Navy’s Type 23 frigates will expire in around 2018. The CAMM family is being designed to meet the MoD’s requirement for a Future Local Area Air Defense System (FLAADS) for the Type 23 Frigate and, subsequently, for the Future Surface Combatant. The impact of the new system could be minimized by reusing existing systems, including Command and Control systems. As the new missiles will employ more advanced targeting and missile homing, tracking and illumination radars can be eliminated.

Another derivative of the CAMM family is considered as a successor for the current Rapier weapon system whose effective service life will expire in around 2020. In this role, CAMM will be fielded as a self-sustained stand-alone unit designed for the networked battlefield environment. A future derivative of the system could be used as an upgrade for the current ASRAAM infrared guided missile currently in service with the Royal Air Force. The CAMM solution has evaluated the future need and by utilizing the existing ASRAAM airframe, with its proven high maneuverability, aircraft integration and clearance costs can also be minimized. CAMM will be able to improve over the current ASRAAM capabilities, particularly as it is designed to engage air targets in highly cluttered environments and adverse weather conditions.

An improved version of the AASM is currently undergoing flight qualification by the French DGA. This ‘metric’ AASM’ version is equipped with the standard INS/GPS guidance system employed by the weapon, and an infrared imager that automatically identifies the target several seconds before impact and corrects the trajectory for much more precise Impact, reducing the circular error point from ‘decametric’ to ‘metric’ dimensions. During the second test held In June 2008, the weapon demonstrated the capability to hit the target accurately without the use of GPS. The AASM flew for about 25km relying exclusively on inertial navigation. On the terminal phase the AASM executed course readjustment using the infrared imager to score a direct hit. On a previous test the weapon demonstrated the capability to attack targets from a range of 50km. The ‘decametric’ AASM is already in service in the French Air Force and has been successfully used several times by Rafale fighter planes in Afghanistan.