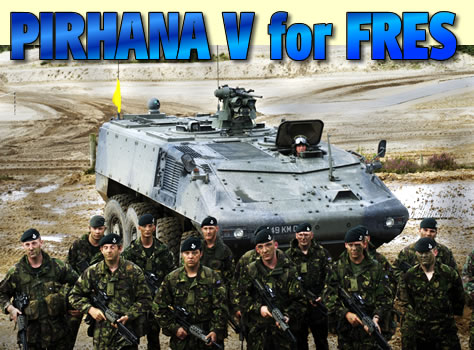 In May 2008 Britain selected the Piranha V vehicle platform, as the Provisional Preferred Bidder for Utility Vehicle Design for its Future Rapid Effect System (FRES) program. Piranha V won after extensive competitive evaluation against the German-Dutch Boxer and French VBCI. The new platform, defined as a medium weight armored vehicle aims to be fielded by 2012 and is expected to replace some of the APCs currently in service with the British Army, including the wheeled Saxon, and tracked FV 430 and CVR(T) armored fighting vehicles. On December 11, 2008 British Defence Secretary John Hutton announced that MoD withdrew General Dynamics (UK)’s provisional preferred bidder status, due to disagreement on commercial terms. The company will have an opportunity to compete in any future Utility Vehicle competition, the minister said. Apparently, one of the major issues in disagreement was that MOD insisted the UK will gain ownership of the design, which GDUK could not accept.

According to General Dynamics, the new platform will offer the protection and mobility to meet the Army’s FRES requirement, together with the necessary growth potential to comply with future challenges. The new platform will be the heaviest variant of the Piranha design, originally developed by the Swiss company MOWAG in the mid 1970s. Over 9,300 Piranha vehicles of different types are operational with world armies today. Once delivered, the UK will be the second largest operator of Piranha variants, after the US (operating LAV-III and Strykers – both variants of the Piranha 8×8).

Piranha V is designed for maximum gross vehicle weight (GVW) of 28 metric tons (62,000 lbs), compared to combat loaded US Army Stryker, fitted with SLAT armor kit which weighs about 20 metric tons (43,000 lbs). The vehicle will be equipped with an uprated power-train, to accommodate the larger weight and power management to customize the increased power demands of a fully digitized platform. While the initial versions will be powered by a diesel engine, General Dynamics is planning to introduce hybrid electrical or full-electric drive as such systems become mature in the future.

Among the three finalists, General Dynamics’ package was attractive not only due to its performance and capabilities, but also for its future export benefit. Since the original model is based on a Swiss design, it is free from the restrictions of U.S. export control. The company plans to shift future design and manufacturing to the UK, thus reestablishing AFV production in the UK.