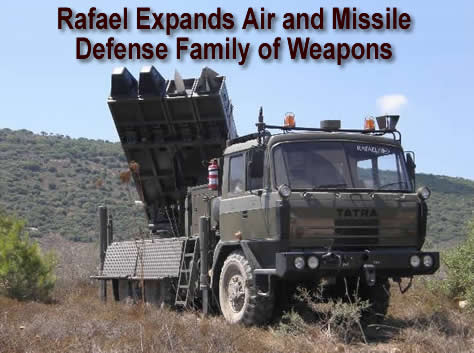 The company is developing two missile/rocket interceptors, the multi-stage Stunner, a high performance missile interceptor, designed to intercept medium range missiles and rockets, at ranges of 70 – 200 km, and the Tamir, a low-cost rocket interceptor, developed to counter ballistic threats such as short range rockets, mortars and artillery. Critical elements of both missiles were already tested, with first demonstrations of a full intercept planned later this year, anticipation for fielding within 24 months.

The design of the Tamir interceptor follows a unique ‘design to cost’ approach, targeting low cost of ownership and cost per kill, by offering robust, field deployable system based on commercial off the shelf elements, and mission accomplishment by providing redundancy, high availability and mutual coverage of a defended footprint. While the interceptor is equipped with a sophisticated seeker and warhead, and is autonomously seeking its target, the ‘brain’ of the system is centralized in the command, control and battle management centers offering maximum utilization of available assets.

The missile will utilize a booster designed by ATK, a multi-mode seeker and multi-pulse rocket motor, developed by RAFAEL. The system could rely on the IAI/Elta Green Pine missile warning radar or the company’s new Multi-Mission Radar (MMR), which is also considered for the short-range rocket defense system, also developed by Rafael. The missiles could be used as ‘stand alone’ systems, using canister, rail launchers or rely on Patriot units, using common container/launchers and battle management systems. By integrating with existing air defenses, Stunner will be able to dramatically improve the survivability of air and missile defense systems, protecting strategic facilities from attacks by short or medium range ballistic missiles and minimize collateral damage from debris. In addition to the development of the Stunner, Rafael is also a subcontractor for IAI for the development of the missile interceptor of the Barak 8 system.

Rafael is also a subcontractor for IAI for the development of the Barak 8 missile.
“We see a growing demand for air defense systems in many of the world’s markets” Rafael’s VP Marketing, Lova Drori told Show News. “The requirements are also changing, from static defense to the protection of large, strategic regions; air defense is evolving from anti-aircraft requirement to a more universal protection from ‘anything coming from the air’, addressing missiles, guided weapons and unmanned vehicles of different types.” Rafael is well positioned to address this change, with a wide range of in-house technologies, including rocket propulsion, warheads, navigation and homing techniques, sensors and electronics.