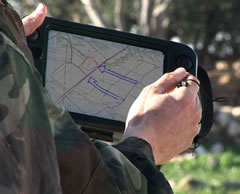 With the first phase of IAS, which focused on C4I is nearing completion, the program office is focusing on the warfighter, says Ram Rotbart, (Maj.) deputy IAS PM at Mafat. Among the many types of hardware considering for the program, IAS project team is assessing several lethality systems addressing anti-material weapons, based on dynamic follow-through charges. Several systems are designed by Rafael, including the Urban STAR and Urban Cannon weapons, the later capable in destroying a whole apartment from a range of 300 meters, without risking collateral damage, or nearby operating friendly troops. For the sniper team, the IAS is considering integration of the Sniper Fire Control System (SFCS) designed to improve hit accuracy by 60%. The Second Lebanon War (2006) clearly proved the importance of firepower & support, made available to the infantry.

Major Rotbart explained that, at its current phase the program is designed to improve command, control and communications at the infantry battalion, primarily improving the dismounted commander’s situational awareness and command and control, at all tactical levels. However, implementing lessons learned during the 2nd Lebanon war with Hezbollah in 2006 and the ongoing combat engagements in Gaza, the IDF is accelerating the second ‘spiral’, which focuses on increasing the efficiency and lethality of infantry tactical units, by empowering the individual soldier as well as the combat team.
This initial phase of the IAS program is scheduled to enter a full-scale field evaluation this year. A preliminary system was tested in 2005 at battalion-level exercise, which led to a decision to enter a 24 month, full-scale development of an integrated soldier system, designed specifically for the tactical infantry leaderhip. The system is developed by Elbit Systems, integrating various subsystems from several (mostly domestic) manufacturers. Different IAS system variants are developed for specific applications, including team leaders (NCOs) and junior officers (platoon commanders), forward observers, special operations operators, snipers, grenadiers and riflemen. The program is scheduled to enter testing, at company level in October 2008 and is expected to undergo field evaluation at battalion level, by March 2009, followed by production decision, by summer 2009. Following more testing the system is expected to become mature for operational deployment, by 2010.

During the past year (since Defense Update last reported on the system), few changes have emerged, primarily with the refinement and evolution of the system’s computer (Personal Digital Unit – PDU) which evolved into a smaller, more energy-efficient unit. The new PDU will run on rechargable Li-Ion batteries betweenfour to 14 hours, depending on the usage and mission profile. The PDU is uniquely designed with a power graphic processor to support extensive 2D/3D graphic rendering and video handling capabilities. In its current form, the PDU weighs 0.7 kg and is powered by a 500 MIPS RISC Au 1550 processor running Windows CE or Linux operating systems. It supports two local area networks (LAN), five USB ports, a serial (RS232) port, analog video and audio with integral Voice over IP (VOI) codec, and Fiber LAN docking interface. The PDU supports a tactical hand-held tactical display or helmet mounted eyepiece or an 8″ flat-panel LCD display used for planning and debriefing.

An innovative element in the Israeli Advanced Infantry Soldier assembly is the Soldier Navigation System, also under development by Elbit. This device augments standard satellite based GPS navigation systems, providing the dismounted soldier with an uninterrupted location and navigation solution. This device is designed for operation indoor and outdoor, and is particularly effective when operated in multi-level urban, wooded area and subterranean environment, operating effectively under different conditions, including walking, running, crawling, jumping or firing. The system’s hardware design has been completed and the project team is now developing sophisticated algorithms to refine and improve the system’s accuracy and predictability. Weighing only 150 grams this cigarette pack sized system uses different sensors, including MEMS based accelerometers, MEMS gyros, magnetometer triad and altimeter to augment a GPS system. The sensors are programmed to detect and classify steps, estimate direction, and stride by movement type and platform, and calculate a position at an accuracy of 1-2% of the distance traveled offering one degree directional accuracy when walking, it will be able to effectively operate for up to three hours without position update.

Read more about the next phase of IAS, addressing enhancement in
urban operations and assault.

Read more about the program in our comprehensive coverage of IAS.