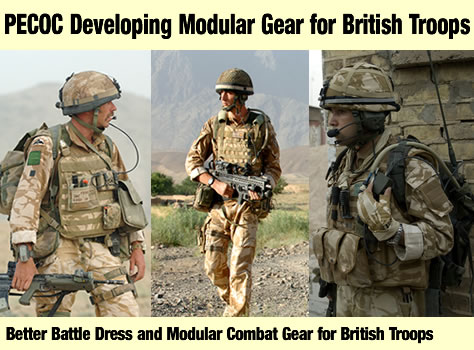 PECOC is scheduled to be ready for operational deployment by 2011. Suppliers and systems are currently down-selected for the initial prototype. The program will be broken into three developmental phases. The most critical element being the load carrying battle suite and protection gear. This system will consist of personally adjustable combat gear, appealing to be better accepted by the warfighter.
Modularity and weight distribution is a significant asset. For example, four elements weighing five kg each, are better than one item weighing 20 kg which has a more significant loading effect on the soldier.

Previous systems were not designed as modular, resulting in painful fielding and poor acceptance by the troops. For example, the Kestrel bullet proof vest developed to replace the older ECBA protection vest was designed for troops operating from vehicular platforms and armored vehicles. However, since troops took these superior protective vests on foot patrols, soldiers complained they were too heavy and uncomfortable and cumbersome, as the excessive armor coverage restricted movement in combat.

PECOC team is considering to retain the currently fielded Osprey advanced bulletproof vest, but introducing a thinner, curved- shaped strike panel, designed for close-fitting, to improve comfort without compromising on protection level. PECOC will have basic lightweight protection for all levels, with add-on heavy (AP plate) and blast protection upgrade.

The AFV crewman’s vest combines water carriage, body armor, load carriage and harness, all in one piece of equipment. In an attempt to overcome the weight problem, the suite is designed to allow soldiers, to flexibly configure the system to the load they carry and to the mission-type performed. For example, on dismounted operations, PECOC will comprise a load carriage system integrated with the assault vest and close-fitting fragmentation and bullet-proof plate. Soldiers will carry an operational day sack optimized for 48 hour mission, with body armor. Alternatively, on extended deployment, soldiers will remove the body armor, trading its weight for a 75-100 litre Bergen, optimized for heavy load carriage.