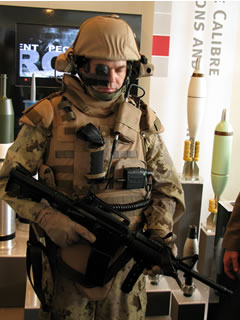 Backed by C$310 budget, Canada’s will equip Canada’s Integrated Soldier System Program (ISSP) is expected to become operational in 2011-2012, as part of a 10 year program launched this year (2008). According to Lieutenant Colonel Jacques Levesque, Program Manager, ISSP, the Canadian program is designed with evolutionary, incremental implementation rather than ‘big bang’ systems, fielded all at once. Similar to the British FIST, the Canadian program uses three primary versions designed as – ‘assault’ and ‘command’ kits, highlighting weapon’s sights and C4I and communications gear, and a minimal ‘support’ configuration.

The program has three phases, each focusing on different aspects of the system; the initial increment currently in development including the vest, head borne systems and helmet, weapon sensors and ballistic protection. It also addresses the physical, electrical and electronic distribution, known as the ‘human infrastructure’ – including load carriage, as well as the cabling and connectors, power and data distribution, linking between all the system’s elements. Phase 2 will begin in 2011 and last through 2016 to be followed by phase 3, beginning development in 2013 aiming at replacing much of the equipment introduced in phase 1 by the year 2016 (implementing the eight year equipment modernization cycle). The Canadians believe that an efficient design of the human infrastructure could prevent errors later in the program, eliminating the development of a ‘Christmas Tree’ effect so common with existing systems.

Most of the Canadian combat suite’s elements are expected to be maintained in service for maximum eight years, thus ensuring continuous evolution of the entire system. The goal of the program is the fielding of systems as widely as possible down to the section level, creating force multiplier through the implementation of ‘system of systems integration (SOSI) approach. The system envisages the deployment of elements of the systems to non combatant elements, such as combat support personnel, creating a common level of communications and situational awareness to encompass the entire force.