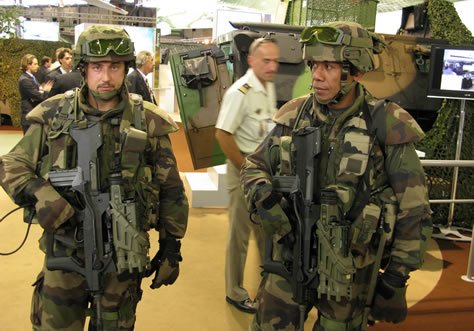 The FELIN project began 15 years ago, in 1993. By 2004 Sagem was selected as prime contractor and development began. By 2009 the initial shipments of the first 1,000 systems are expected. In July 2008 the program will pass a major milestone, as decision on the production of the first thousand systems will be taken (the total FELIN acquisition, is expected to be 31,588 units). Sofar, prototype systems were delivered and tested, the most recent trials ended in April 2008 involving 40 systems. According to Jacques Dechoux, Programme Manager, FELIN, MoD France), 358 systems are being delivered, and will enter extensive and long field testing, beginning July this year (2008). Three infantry companies are being equipped with FELIN and will evaluate them during operational training during nine months.

Part of the recent studies included done as part of FELIN provided a detailed review of the human factors involved with extended mounted operations. Sofar most studies focused on the dismounted aspects of the soldier system, while little attention was given to the comfort, usability and ergonomics of soldier wearing combat suites inside the vehicle’s space for extended time. The FELIN study evaluated the seating configurations (facing columns) with weapons and communications gear connected to ‘hot shoes’ providing intercom and recharging.