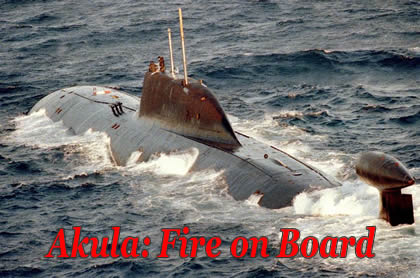 In the latest incident of undersea tragedies that have struck the Russian Navy, a serious accident aboard a Russian nuclear attack submarine killed at least 20 and injured 22 last Saturday, November 8. The K-152 Nerpa (Seal), a Shchuka (Pike) class, (NATO Akula II) nuclear submarine was apparently on sea trials, sailing out from the shipyard in Komsomolsk-on-Amur, near Vladivostok, the Russian Navy Pacific Fleet base. Novosti reported that the incident, which killed 20 people on board a Russian Pacific Fleet nuclear submarine occurred by a fire in the bow of the boat, but there was no immediate threat to the nuclear reactor, which is located in the stern section of the boat a source in the Pacific Fleet Headquarters said. A malfunction of the automatic fire suppression system seemed to be the source of the accident.

According to Russian naval sources, there are two fire suppression systems on board nuclear submarines: air-foam and chemical. The air-foam system is designed to extinguish local fires and consists of two stations located at either end of the boat. The foam reserve supports six foam stations. Each station can produce one cubic meter of foam which can be applied by means of a 10 meter long hose. The stations are placed such that they can deliver foam to any corner of the compartment.

“India has been one of the main supporters of Russia’s defense industries after the Soviet Union collapsed, and provided funds that helped to keep our shipbuilding going,” says Vadim Kozulin, a military expert with the PIR Center, a security think tank in Moscow. According to media reports, a deal was struck in 2004 in which India paid up to $650 million to refit the Admiral Gorshkov, a Soviet-era aircraft carrier, and assist completion of the Nerpa, which had lain on blocks at the Komsomolsk-na-Amur shipyard since its construction was largely abandoned in 1991. In fact, Indian media have reported on various occasions that the construction of the Nerpa was partially financed by the Indian government, which paid $650 million for a 10-year lease of the 12,000-ton submarine. Nerpa is planned to join the Indian Navy in 2009 to be re-designated INS Chakra. Indian news agencies reported last week that a team of 40 Indian naval specialists was slated to arrive in Vladivostok to learn about the ship. India previously leased a Charlie I class nuclear submarine from the Soviet Union from 1988 to 1991, while Russia also handed over to India the INS Sindhuvijay a diesel-electric submarine, after an extensive overhaul at a shipyard in northern Russia.

Several incidents involved Russian submarines in the past. The worst-ever submarine disaster occurred in August 2000, when the nuclear-powered Kursk, one of their newest cruise missile submarines, sank mysteriously in the Barents Sea, killing all 118 crew members. Three years later, a decommissioned nuclear sub, the K-159, sank in the Barents Sea, killing nine members of the skeleton crew aboard at the time. Then in 2005, a mini-submarine of the Pacific Fleet got trapped in an undersea fishing net near Vladivostok, and was only saved with the help of a British rescue team. On September 7th 2006, a Victor III submarine K-414 Daniil Moskovsky suffered an electronics fire, caused by short-circuit in the nose section, while in the Barents Sea, killing two crew members. The boat was already 16 years old and long overdue for overhaul.