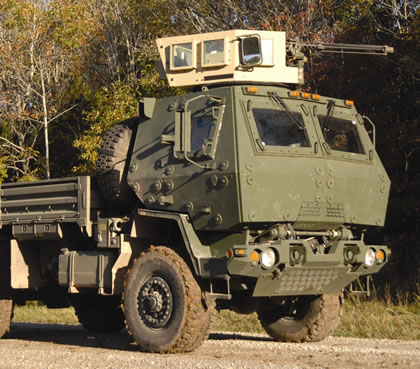 BAE Systems has been awarded a $1.6 billion contract from the U.S. Army to build 10,000 Family of Medium Tactical Vehicles (FMTV) and trailers for delivery during 2009 and 2010. BAE is already working on two previous orders received earlier in 2008, for the production of 10,000 vehicles. This new contract brings the total award value for FMTV trucks received in 2008 to $3.7 billion. “This award will boost FMTV production to record rates” said Chris Chambers, vice president of Medium/Light Vehicles at BAE Systems Sealy, Texas.

These new vehicles designated A1P2 LTAS FMTV will be manufactured to adhere to the US Army Long Term Armor Strategy (LTAS) configuration, which is designed to accept an adaptable armor system, allowing protection to be increased or decreased based on specific threat levels encountered in theater. Production of the new LTAS cargo vehicle will be performed at BAE Systems’ facility in Sealy, Texas and Cincinnati, Ohio. Deliveries will run from early 2009 till February 2010. Deliveries of the option segment of the order will complete by November 2010.